The Saginaw Valley Railroad purchased several former C&O lines in the Saginaw and thumb area of Michigan in the late 1990's. The line was operated by RailAmerica, and then merged into the Huron & Eastern railroad by Genesee & Wyoming, it's current owner.

Purchased: In 1998 from Hoyt (Saginaw) to Brown City and Avoca.

Owned by: RailAmerica, and then Genesee & Wyoming. Now operated as Huron & Eastern. 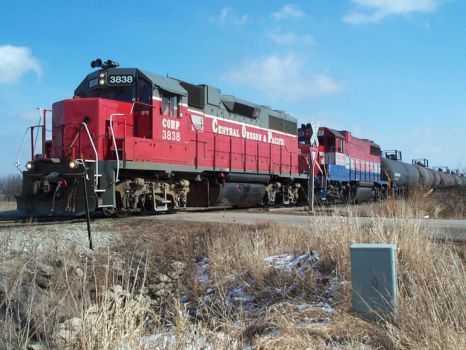 Photo info: Central Oregon & Pacific #3838 (a RailAmerica subsidiary) is assigned to the Saginaw Valley, and along with #3868 pulls a train of tank cars at Towerline Road near Saginaw. [Paul Cameron photo]