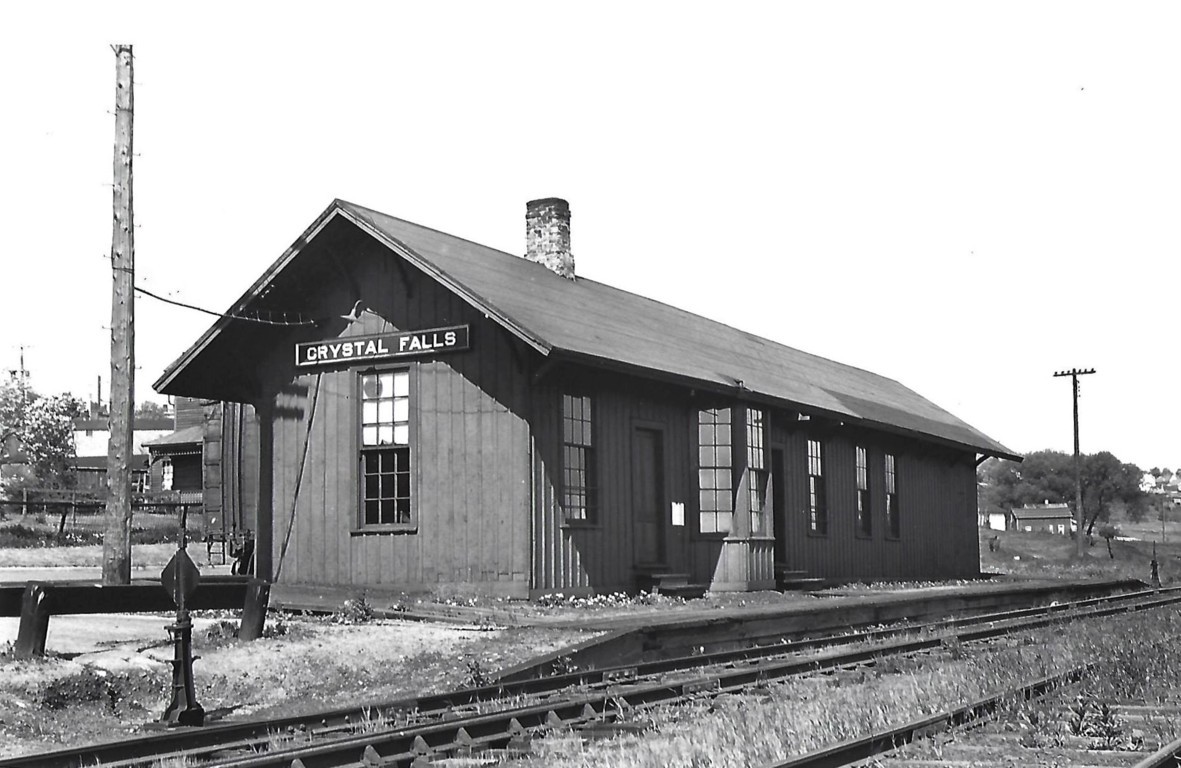 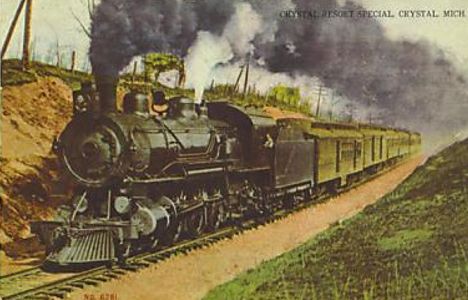 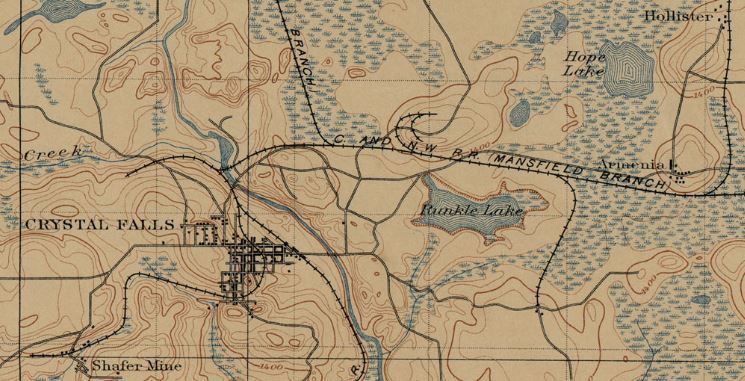 Crystal Falls was platted in 1881, but the settlement was not truly established until the arrival of the Chicago & Northwestern Railroad from Florence, Wisconsin in 1882. Florence is just south of Iron County.

Mining was begun with ore being moved to Florence for shipping. By 1881, enough ore had been unearthed to warrant the extension of the C&NW from Florence, 15 miles to the south of Crystal Falls. The first train arrived in April, 1882. Mines in Crystal Falls employed more than 500 men at their peak.

The settlement was incorporated as a village in 1889 and was designated as the county seat at that time. In 1883, a strike by miners brought a temporary suspension of activities and a year later the depressed iron market forced the closing of all mines but one.

Lumbering provided a steady means of employment during that time. The population of Crystal Falls grew to 3,231 by the 1890 census and their were 27 saloons doing a busy trade with the clientele of miners and lumberjacks. Electric power was installed in the town in 1891 following the building of a hydroelectric power plant and water system. The village was incorporated as a city in 1899. Sewers were installed in 1902.

Growth halted in the 1930's with the arrival of the Great Depression when most of the mines were closed. The industry revived briefly during World War II, but then declined. [Iron County Historical Society information]

Photo Info/Credit: Top, the Chicago & Northwestern depot at Crystal Falls. [Ed Selinsky photo, CNW Historical Society]. 2nd photo, a postcard view of a passenger train near Crystal Falls in 1911. The postcard suggests that this is a "Resort Special" which could have been on either the Chicago & Northwestern or the Milwaukee Road, both serving the area. [Dale Berry collection]. 3rd photo is an 1895 map of Crystal Falls, prior to the Milwaukee Road coming to town. [DJB] 4th photo, a Sanborn Insurance map drawing of the C&NW turntable and engine house at Crystal Falls in 1922. [LOC] 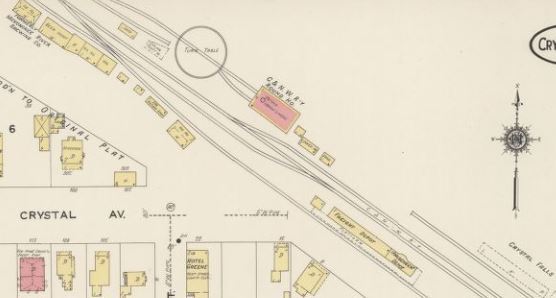 1913. The number of prisoners at the Iron County jail during year year 1912 increased from 135 in the previous year to 228. The increase was due mainly to the number of bums that got to this district with the men shipped up to work on the Milwaukee Road (railroad) grade. There are five persons now in the jail charged with murder. There has been more lawlessness in Iron county during the past year and more extreme violence than for any year in its history. [TDD-1913-0104]

1918. MILW had a station agent here on the day shift. The C&NW had an agent during the day, and a telegraph operator on the 1st and 2nd shifts.  [TRT]

1922. The Milwaukee Road passenger and freight depots were located north of Crystal Street between 3rd and 4th streets. This was a stub end depot, with tracks coming from the north. [SBM-1922]. This is about 2 blocks from the C&NW depot.

1881 - Survey of a railroad route is commenced north and west from Florence, Wisconsin. The territory is rough but the railroad will be put in as soon as the survey is complete. [DFP-1881=0415]

1882 - Chicago & Northwestern arrives (via branch line from Stager). The branch ends at Crystal Falls Junction on the north side of town.

1882 - The C&NW branch line is built from Crystal Falls Junction over the Paint River (north of the power dam) to the Crystal Falls Mine, 1.5 miles. This is later named the Mansfield mine branch.

1882 - The C&NW builds a short looping branch from Crystal Falls Junction southwest 0.4 miles to the Youngstown Mine. In 1892 this is extended to the Bristol Mine, and in 1911 to the Ravenna Mine for a total of 1.2 miles.

1889 - C&NW branch at Crystal Falls Mine is extended 4.7 miles to the Mansfield Mine, with a number of branch lines and spurs to various mines.

1891 - A branch is built from the Mansfield Branch (near Crystal Falls Mine) north to Amasa, 13.4 miles, to serve several mines there.

1893 - The Panic of 1893 reduces iron ore purchases for several years in the region.

1909 - The Milwaukee Road continues west to the Chicagon area from Crystal Falls Junction, and then to Iron River in 1914.

1915 - The C&NW Mansfield branch is removed east of the Great Western Mine.

1937 - The C&NW and Milwaukee Road create a ore pooling arrangement. From this point forward all ore is transported to the port in Escanaba. A slow process of removing duplicate mine spurs is begun.

1937 - The C&NW Mansfield branch is removed from Crystal Falls Jct. to the Great Western Mine, along with the Amasa branch.

1969 - The MILW branch from Kelso Jct. to Crystal Falls and Iron River is abandoned and removed.

1982 - C&NW Crystal Falls branch is abandoned and pulled up. [MRL] This is the last railroad service to Crystal Falls. Community's population is about 1,965.