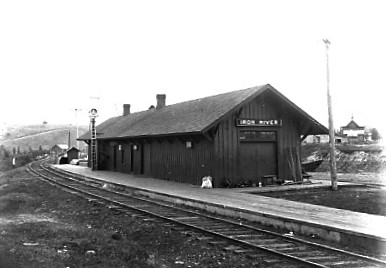 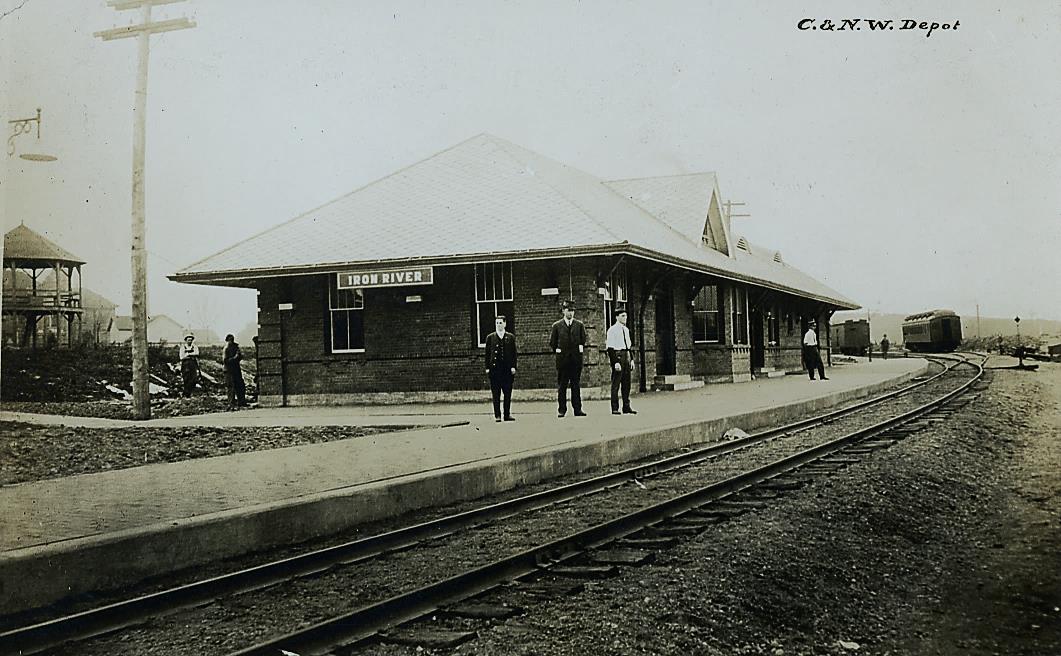 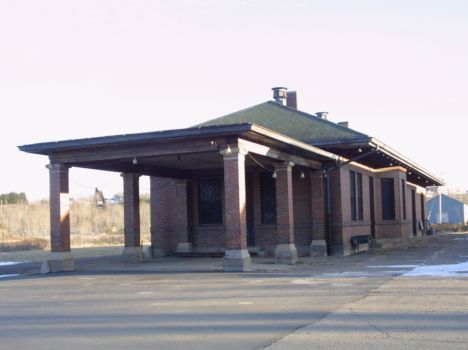 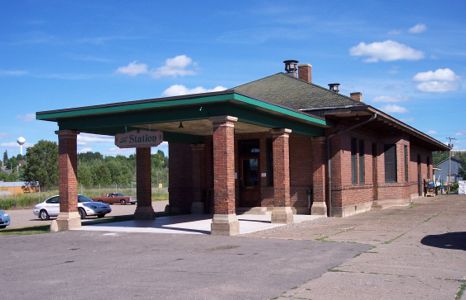 Exploration for iron ore in the Iron River area was begun in 1880. The first iron mine, the Iron River Mine, was opened soon after. The name of this mine was changed to the Riverton Mine sometime later.

The C&NW line to Iron River was completed in the fall of 1882. Although the original village grew rapidly, the Panic of 1893 stifled further growth for some time.

From 1889 to 1900, no ore was mined on the entire west side of Iron County, including near Iron River. During this period, residents turned to logging for employment. Small logging railroads penetrated parts of western Iron County, allowing for harvesting of hardwood stands after the pine was removed.

The turn of the century saw the areas greatest period of growth, with a steady increase of pig iron using the soft, phosphoric ores found around Iron River. New mines were developed at a rapid pace after ore was discovered outside of the Iron River valley at the James Mine in 1905.

This area later became Mineral Hills. From 1905 to 1912, the number of mines increased from six to 16. The Village installed a sewer system in 1905 and electric light facilities in 1908. The 1910 census showed a population of 7,816 on the west side of Iron County.

The cluster of towns around Iron Mountain (Caspian, Stambaugh, Gaastra and Mineral Hills) were united by public transportation in 1913 when a street railway franchise was granted to the Iron River and Crystal Falls Street Railway Company. The 4 and 1/2 mile long line operated until 1921, only eight years.

Iron River was incorporated as a city in 1926. The Great Depression forced the closing of most mines and although some reopened at the beginning of World War II, the mining industry never again regained its earlier high level of production.

The MILW branch from Crystal Falls to Iron River was abandoned and removed in 1969. The C&NW line was removed in 1982. [MRL], ending railroad service.

In 2000, Iron River, Stambaugh and Mineral Hills merged to form the new City of Iron River.

[Information researched from an article from the Iron County Historical Society, written by Marcia Bernhart]

1918. MILW had a station agent here on the day shift. The C&NW also had an operator during the day at their station. [TRT]

January 3, 1959. Railroad Asks Change of Track at Stambaugh. Washington (AP) - The Milwaukee Road has asked the Interstate Commerce Commission for authority to relocate it operations in the vicinity of Iron River and Stambaugh.

The company proposes to abandon about two miles of trackage in and around Stambaugh because it has been advised than an iron ore mining operation is approaching the right of way with threat of cave ins.

The Milwaukee has contracted with the Chicago & Northwestern Railway for use of about five miles of its tracks as a substitute route between Stambaugh and Iron River. [IDG]

1882 - Nearby village of Stambaugh is platted, as is the Village of Gaastra.

1891 - The city of Caspian was platted between Stambaugh and Gaastra. Caspian was originally names Palatka and became the headquarters of the Verona Mining Co., which operated the Caspian, Verona and Fogarty mines.

1893 - The Panic of 1893 reduces iron ore purchases for several years in the region.

1893 - Hiawatha Mine No. 1 is started, including parts of the Wickwire, Anna, West Hiawatha, Stegmiller and North Hiawatha mines. Mining continues here into the 1950's.

1900 - The Baltic mine in Caspian begins operation.

1904 - The Youngs Mine in Gaastra begin an underground mine which produces until 1928.

1906 - Village of Mineral Hills north of Iron River is founded.

1907 - The C&NW builds a spur from the main line to the Caspian, Mansfield and Fogarty mines. The spur is removed in 1967.

1907 - The Zimmerman underground mine begins operation in Gaastra and operates into the 1950's. It became part of the Buck Group around 1944.

1909 - The underground Baker Mine is established, producing until 1915.

1909 - The Tully Mine begins operation, followed by the Bengal Mine in 1913. The mines, later known as the Cannon Mine continue operations in the 1950's.

1911 - The Davidson Group of mines in Mineral Hills begin operation with 4 shafts reaching about 900 feet. Operate into the 1950's.

1912 - The Rogers Mine takes over the (Blair, Erickson, Swanson, Paulsen and White mines) in Iron River. Operates until 1945.

1914 - The Milwaukee Road (MILW) - Chicago, Milwaukee, St. Paul and Pacific) reaches the Iron River area from Crystal Falls and the Chicagon area, bringing a 2nd railroad to town and offering mining companies competition in ore transportation rates. The MILW also builds the Bates Mine spur reaching the Bates Mine, as well as in the Mineral Hills area, including the Virgil Mine, the Tully Mine and other mining spurs. The line is removed in 1956.

1914 - The Homer Mine takes over operations of the Cardiff, McGovern, Keweenaw and Minckler mines. It continues to produce into the 1950's.

1915 - The Cotrell Mine opens and produces until 1916. In 1950, the Verona Mining Co. uses this mine to operate the Berkshire which adjoins it.

1917 - The MILW builds spurs off its Bates mine spur, reaching the Spies Mine

1931 - The Sherwood Mine operates in Mineral Hills, closing in 1978. this is the last working mine in Iron River.

1935- The Hiawatha Mine No. 2 at Caspian begins operation (including the former Duff, Dober and Isabella mines). It continues to produce into the 1950's.

1936 - The Brule Mine begins operation in Stambaugh and operates until 1936. This was sometimes called Hiawatha No. 3 mine.

1937 - The C&NW and Milwaukee Road create a ore pooling arrangement. From this point forward all ore is transported to the port in Escanaba. A slow process of removing duplicate mine spurs is begun.

1950 - The Cannon Mine sinks a new shaft, as part of the Bengal-Tully-Cannon Mine. The De Grasse Mine begins operation in Gaastra.

1969 - The Milwaukee Road abandons operations in the Iron River area and removes their rail. The C&NW continues to serve the area for thirteen more years until 1982.

1978 - The Sherwood Mine closes in Mineral Hills. This is the last working mine in the Iron River area.

1982 - The C&NW main line between Iron Mountain and Watersmeet is abandoned and removed, including all trackage in the Iron River area.

2000 - The city of Stambaugh and the village of Mineral Hills are consolidated with the City of Iron River.