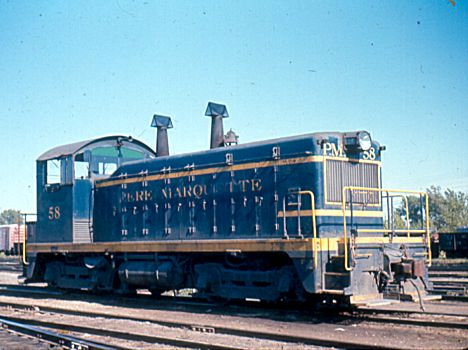 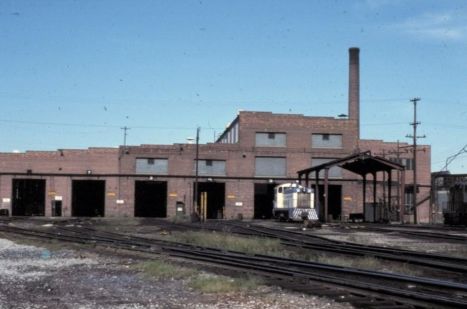 Photo Info/Credit: Top, Pere Marquette 58, a switch engine, is photographed at their Wyoming yard in 1966. When this photo was taken, ownership of the PM had already been taken over by the Chesapeake & Ohio. [Bill Moore]. Below, the C&O Wyoming Yard shops in 1977. [Charles Geletzke Jr.]

1905 improvements. The Wyoming shops at Grand Rapids are being constructed, including a main shop building 126x333' of brick and steel which contains the machine, erecting, boiler and blacksmith shops. This building is equipped with an overhead electric traveling crane for handling locomotives and smaller cranes for lighter work. The machines are motor driven.

The engine house is 88x434' and is constructed of brick and steel and contains twenty-four stalls. It is of the rectangular type and heated by hot air system, which also heats the main shop building.

Between the main shop and engine house is a 70' electric transfer table on concrete foundations.  The power house (64x92') is built of brick and steel.

There is a brick store house 40x150'. On the second floor of this building provision has been made for the offices of the Mechanical and Store Departments. Sheds, platforms, bins and tracks are provided for new and old material. The oil house (40x40') is of brick construction.

Water is pumped from Grand River to a high steel water tower of 100,000 gallons capacity, by pumps located in the power house.

In 1945. The PM had a 115' three-bearing, electrically operated turntable at this location.