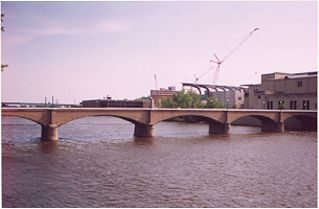 This is a fixed, unmovable bridge which crosses the Grand Rapids River at the foot of Lyon Street.  It was originally a high-traffic bridge by the Michigan Railway which was a well-built interurban line.

In Grand Rapids, one of the ways that you can identify an old railroad bridge is because it is relatively flat without pitch.  Old vehicle bridges often are bowed in the middle and down on both ends.