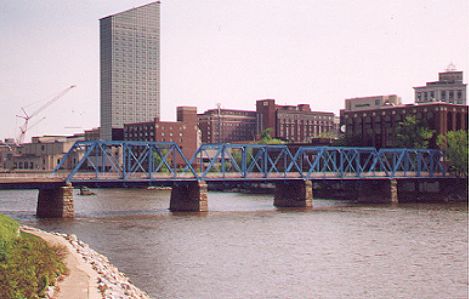 This fixed span bridge over the Grand River is at the foot of Lyon Street and near the Ford Museum was built in 1892, apparently without any type of swing or draw.  It was used by the Grand Rapids & Indiana and later the Pennsylvania Railroad to cross the river and head north and west to Muskegon, and Mackinaw City. It is used today for downtown foot traffic. The bridge is 575 feet long with the largest span being 125 feet. It was 24 feet wide for two tracks and has five spans. The westernmost span is 125 feet long made of simple steel I-beam constructions, while the remaining four spans are of Pratt truss design. This bridge replaced a former GR&I bridge which was completed on September 12, 1868.

This bridge was abandoned when Conrail began using the CSX bridge in the 1980's. Information provided by Carl Bajema.