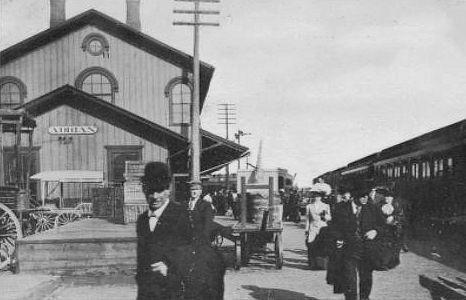 The second railroad to arrive in Adrian was the "Southern" railroad, owned by the State of Michigan. This road was sold to the Michigan Southern railroad, a private organization.

Adrian became headquarters for the Michigan Southern and they had extensive facilities here in the mid-1800's. In the 1880's, the facilities were reduced as locomotives could travel longer distances and the railroad branched out to Toledo and Chicago.

SNAPSHOT: In 1936, Adrian's railroad telegraph call was "AN". Now known as the New York Central, the railroad was operated as a manual block operation in both directions. WB Tower (at the Wabash crossing) controlled the westbound manual block signal at milepost 329.1 (near Cadmus). According to timetable information from this period, there were railroad telephone locations on the NYC at the station, the yard office and the freight office. In addition to the railroad's dispatcher, message and block telephone lines, the city also merited a "yard" line for local communications. Track speed was limited to 60 mph for passenger and 40 mph for freight trains in both directions. The NYC surgeon at the time was Dr. W. E. Jewett Jr. in Adrian and he could be reached by calling telephone number 97 on the city's phone system. The NYC's passing track (westbound) held 50 cars (44') and the eastbound passing track held 62 cars. There was a water station in Adrian.

SNAPSHOT: 1936 was in the midst of the depression. There were 15 trains listed in the timetable for Adrian, which does not include extra trains:

Source for this information is the NYC Lansing Division employee timetable No. 43A on July 15, 1936.

The LSMS/NYC had a turntable at Adrian. It was removed by 1975. The LSMS also had a water tower here.