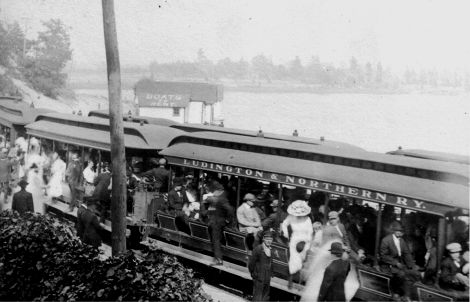 Hamlin Lake, in Mason County, was settled about 1850 when a mill was built here. It was originally called Black Creek and then Big Sauble.The area was changed to Lincoln in 1861. Lincoln was the county seat until it was moved to Ludington in 1872. The land was cleared of timber by 1891. At some point, the area became known for the large lake here called Hamlin Lake and became a resort area. [MPN]

Hamlin Lake was the north end of the Ludington & Northern railway which ran from Ludington north to here.