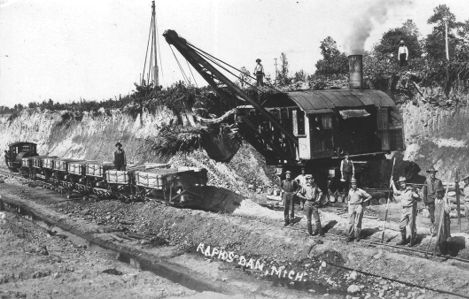 Ingalls was settled about 1858 and became a station stop on the Chicago & North Western railroad when it later came through the area in 1872. [MPN] The location is aboutg two miles south of Stephenson.

Photo Info/Credit: Top, an old photograph from Grand Rapids Dam southwest of Ingalls. The shortline railroad and steam shovel are assisting in construction of the dam. [Mark Worrall collection]

April 4, 1930: The Michigan Public Utilities Commission denies a request by the C&NW to change this station from a staffed agency to a prepay station. The Commission rules that sufficient revenue exists here to justify the agent. [MPUC-1930]