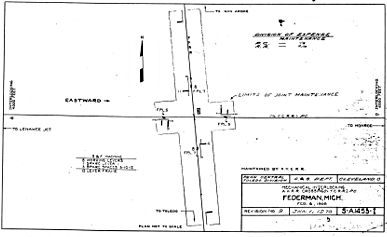 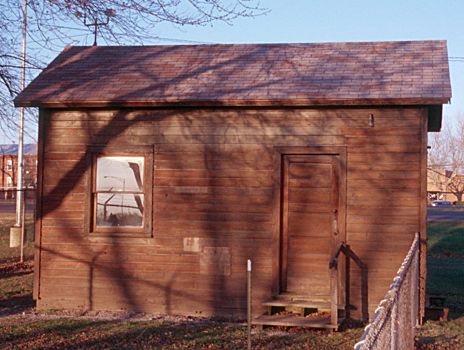 Federman was the name of a grade crossing of the Ann Arbor railroad main line (Toledo, OH to Frankfort) and the New York Central's Monroe Branch. This crossing had a manual ground interlocker which was operated by MC crews and realigned for AA trains after crossing.

Contribution from Mark Dobronski:  Up until 1975, Federman had a little shanty about 12x12, inside of which was a 10 lever Saxby & Farmer "armstrong" lever interlocking machine.  NYC (Conrail by that time) train crews operated the interlocking levers when they needed to cross the AA.

There was never a wye or interchange at Federman, it was only a crossing at nearly a 90 degree angle.  Until 1975, the NYC tracks actually had semaphore signals guarding the crossing.  The semaphores were operated by rods/pipes connected to the armstrong levers.  There was no electricity at the shanty, and the AA had "bastardized" the interlocking by cutting the locking bed to one of the 2 levers for the AA signals, so that the AA had "clear" going in both directions at the same time when the signals were lined up for AA. There never were any gates, although a 1960's era NYC employee timetable mentions "train crews will operate the gate" (but I think the footnote was meant for Petersburg, where there were gates).

In 1975, the Ann Arbor upgraded their signals going South from Diann. That was the same year that Diann went from a US&S interlocking machine to an N-X panel. At that time, Federman was upgraded to an "automatic interlocking". The semaphores were removed and replaced with red/green "pot" signals at ground level, and the "armstrong" was decommissioned.

Within about a year, the little shanty was bulldozed, and the remnants of the armstrong interlocking levers are still located on the Northeast corner of what was the crossing, buried in the grass... leastwise they were there in May 2001, when I visited the site.

It was a couple years after 1975 when Conrail abandoned the Ida Branch, and the crossing was removed from service. But, it looks to me like the AA never wasted time nor money to change the signals, and the signals likely serve their intended ABS purpose, and may even still "protect" a crossing which is no longer there. (After all, why spend the time and money to take all the circuitry out if the track is taken up??? It would not be the first time!)

There used to be a depot at Federman on the LS&MS (NYC), and up until 1950-something, they even had a passenger-mixed train that stopped there (according to NYC employee timetables I have from that time). The depot now is at the Monroe County Fairgrounds. At least THAT history was preserved.

From Red Board West by Jim Sinclair [AATHA-W/1990]: Federman Interlocking was a mechanical interlocker more antiquated than Milan, however the same principle of levers and pipes applied to its operation. One exception was that the semaphore-type home signals used here were pipe connected and operated, while Milan's signals were of the searchlight variety and thus electrically operated.

Federman incorporated "splint point" derails on both the Ann arbor and Penn Central.  This type of derail can be best described as a half of a switch. The points incorporated into the interlocking, just beyond the home signals, so that if a train should run a stop signal, it would literally be derailed by the open switch point. It must be assumed that the signal engineers considered it more desirable to have an engine and a few cars "hit the ground" than to have a broadside collision with a crossing train movement.

The building which housed the Federman interlocking machine could be described by the average passerby as an "old shack".  The building was elevated approximately five feet to accommodate the pipeline equipment.  Its windows had been broken out and boarded up, and it was in dire need of a fresh coat of paint.  A closer look at the interlocking in 1971 found the door unlocked and curious eyes found an interlocking machine equipped with approximately 14 operating levers.  The operating instructions appeared to have been hastily scrawled on an old piece of cardboard or poster board.

Timetable instructions on both railroads dictated that the plant would normally be lined for Ann Arbor trains.  Upon the arrival of any Penn Central train, a member of the crew was required to converse with the Ann Arbor dispatcher, obtain his approval, and then operate the plant himself.  Upon completing the move through the plant, the PC crew would restore it back to normal, lined once again for Ann Arbor trains.

The old Federman Interlocking "shack" finally succumbed to obsolescence and deferred maintenance in January, 1972 when the Ann Arbor completed its Traffic Control System (TCS) between Alexis and Diann. The interlocking was converted to automatic operation with the old pipe-connected semaphore-type signals and derails eliminated and new color-light signals placed in service. The speed limit was raised to 40 MPH (on the AA) and the building was ultimately razed.

Penn Central crews were still required to obtain permission from the AA dispatcher prior to making any movements through the interlocking plant. By 1975, the PC was still in bankruptcy, and no longer running any trains through Federman. In August, 1975 a 10 MPH speed restriction was placed in effect because the diamond had "worn out" and was in need of replacement. The Penn Central would normally have shared the cost for a new diamond, but it must be presumed that they had no intention of running any more trains or helping to pay for a new diamond. Subsequently, the diamond was removed in October, 1975.  (A check of the area in December, 1989 found the diamond and all evidence of the PC trackage gone, but the color-light interlocking signals still in place, although inoperable.) This brought to a final close, roughly 135 years of rail

Photo Info/Credit: Top, a map of the interlocking drawn from the State of Michigan Archives. [Dale Berry]. 2nd photo another map of the right-of-way. 3rd photo, the depot at Federman which has been moved to its current location in the Monroe County Fairgrounds. [Mark Dobronski]