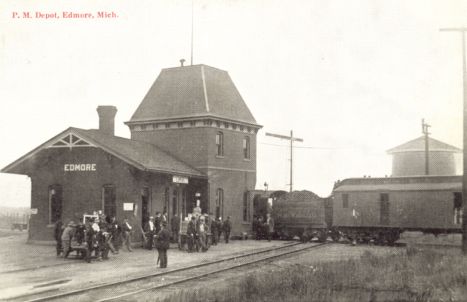 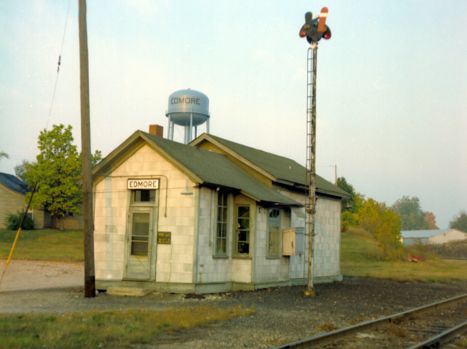 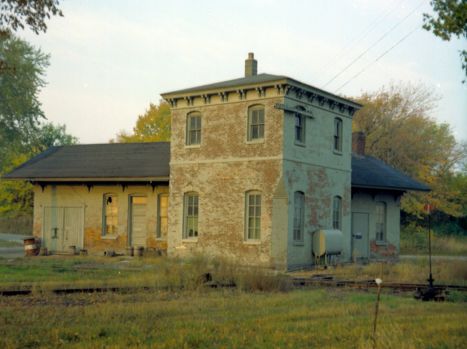 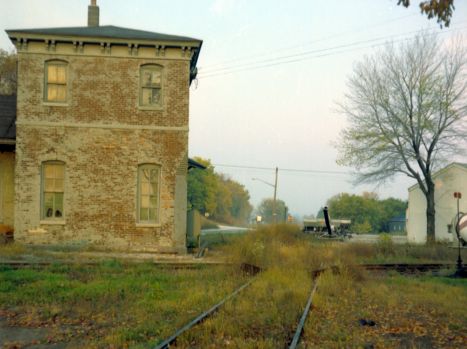 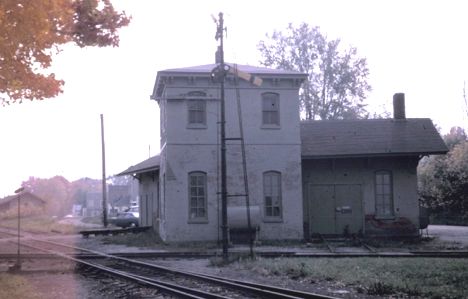 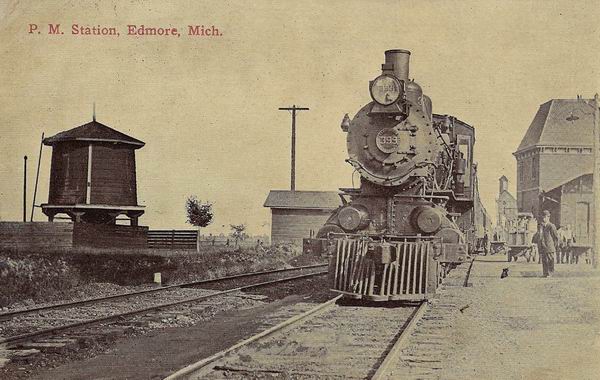 Edmore iis a village and was a railroad junction point in northeast Montcalm County. It was settled about 1878 and became a village in 1879. [MPN]

The town was located on two Pere Marquette lines. The east-west line ran between Saginaw and Howard City, and the south-north line ran between Ionia and the Muskegon area via Big Rapids. These lines north and west of Edmore were truncated to shorter branch lines, but the south and west legs became a through route for freight and passenger trains running between Grand Rapids and Saginaw via Elmdale.

Photo Info/Credit: Top, an old postcard view of the Pere Marquette depot at Edmore. This unique two-story depot was at the crossing of two PM branch lines. The crossing appears to be controlled by a manual target on a pole. The Edmore water tower can also be seen in the background. [Mark Worrall collection]. 2nd photo, a 1970's photo of what remains of the station. [Robert Smith] 3rd and 4th photos, 1970's color photographs of the Edmore depot. [Bob Smith]. 5th photo, the depot in 1971. [Charles Geletzke Jr.]; 6th photo, a postcard view of the station and locomotive.

Comment from contributor Doug Hefty:  "I lived near Edmore from the late 1940's to mid 1950's. The track in front of the depot is the Remus Branch and the other is the Lakeview Branch which was abandoned just west of the depot in 1973. The Remus branch was abandoned in 1981. It contained 70 to 80 lb. rail. The second floor was used for trainmaster for this area into late l930s. In the 1980's there was talk about preserving the depot but it was not successful.  The last passenger train in Edmore was in late 1941. After that time, the depot was used by the PM track department. Around 1991, the depot was torn down and the remainder of the Remus Branch track at Edmore was removed. The other station in Edmore was really a train order/freight clerk office. It was also used as a mail stop until late 1947 or early 1948. That building was closed in June, 1981 and removed in 1982. A McDonalds sits in front of this location now (2003) on the north side of M-46. The junction had two wyes, one south and one north, which allowed turning of an engine or a short passenger train. They did this until 1936. There was also a coaling station and water tower at Edmore until 1951. From Gene via the RRHX History Bulletin Board.

Comment: The train order office for the Elmdale SD was located East of the "old" depot shown in the photos. The main line was actually the southeast wye. There was also a northeast wye west of the train order office that headed around toward the Remus branch. The passing siding and a couple of yard tracks were located east of the train order office. Edmore was a preferred meeting point for through trains because there was a restaurant there. If one of the trains "fell down", the first train arriving would go to eat. Even if a more perfect meet seemed to be at Elwell or Vestaburg, it made more sense to use Edmore or Alma where they could "go to beans" if necessary.

1944. Timetable notes that the "engine coaler" at Edmore will not clear a man on top or side of a car.