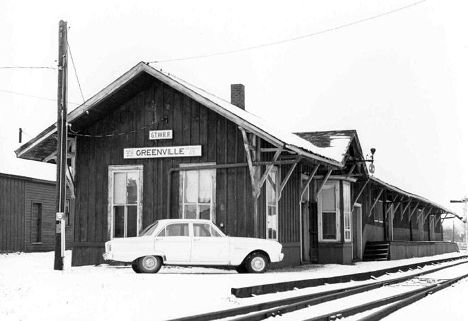 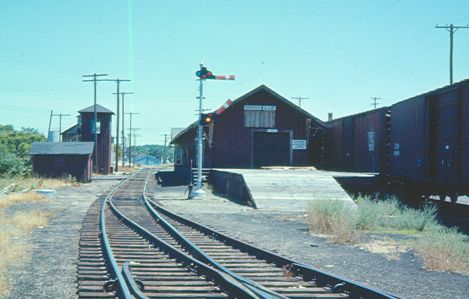 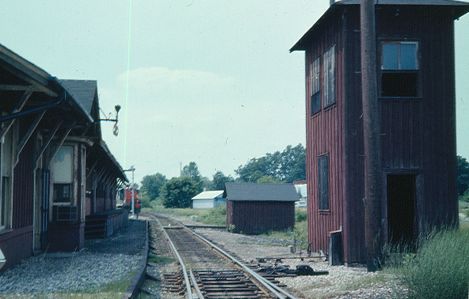 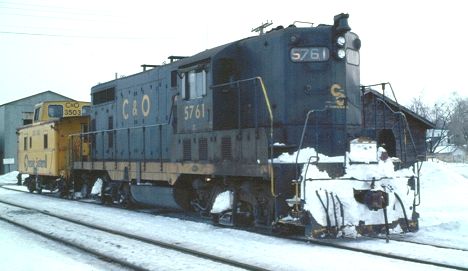 Greenville was settled in Montcalm County about 1844. It became a village in 1867 and a city in 1871. [MPN] Greenville was an important junction point on two railroads and served as a junction for a third line.

Photo Info/Credit: Top, the Pere Marquette station at Greenville with a passenger train along side. Local dray carriers are picking up passengers and freight. [Alan Loftis collection]. 2nd photo, a 1970's photo of the Grand Trunk Western depot at Greenville. [Charlie Whipp]. 3rd and 4th photos, 1973 photographs of the depot and interlocking tower in Greenville. This is an example of one of the most simple interlocking towers in Michigan. There is one pipe protruding out of the base of the tower to control the switch for the PM or GTW. The tower probably also controlled the two-aspect signal on the other side of the depot which is set for a diverging route. Most simple interlockings in Michigan were actually ground interlockings (with levers at ground level). [Greg Bunce]. 5th photo, the C&O Greenville switcher (C&O 5761, a GP-7) and caboose in March, 1979. [Greg Bunce]. 6th photo, C&O 5797 with a train near Greenville engine house in October, 1978. [Charles Geletzke Jr.]

1890 improvements. The DL&N freight house was repaired; a new foundation was put under the water tank, and a pump house was built with a new pump put in. [DL&N-1890]