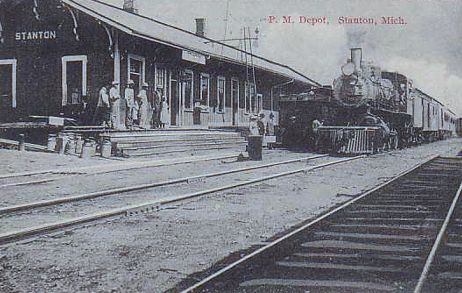 Stanton was settled about 1860 and is the county seat of Montcalm County. It is located in east central Montcalm County. The town was incorporated as a village in 1869 and became a city in 1881. [MPN]

Stanton was located on the Pere Marquette branch which ran between Grand Rapids (via Elmdale) and Saginaw via Lowell, Greenville, Edmore and Alma. Another branch left this line just south of Stanton to Ionia.

The depot in Stanton was located on the north side of east Pine Street on the west side of the tracks.  The turntable was located on the eastside of the tracks between Crawford and Bellevue Street.  This depot in Stanton was  closed in 1961 and torn down in 1962, according to Eugene Zank.  The track from Stanton south to Sheridan, and to Stanton Jct. was removed in 1933.  Photo from collection of Merritt Scharnweber.  [I&L]

1878 improvements: A new passenger and freight house was expanded in Standon. [DL&N-1878]