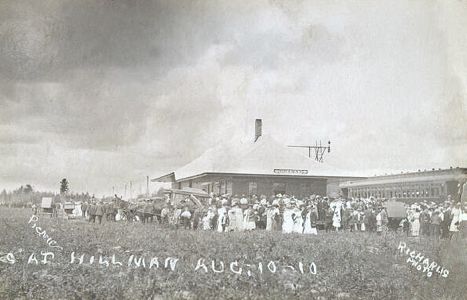 Hillman was founded in 1880 at the very eastern edge of Montmorency County. It became a village in 1891 and was platted in 1882. [MPN] It was initially called Brush Creek. [Wiki]

Hillman was the county seat of Montmorency County from 1881 until 1893. [LITF]

Hillman suffered several serious fires in the early years, the most destructive occurring in 1908 in the surrounding forests.

Hillman was on a branch line of the Detroit & Mackinac railroad from Alpena which reached the village in 1909. This was technically the end of the branch line but maps suggest that temporary forest lines extended west from here. The Hillman branch was pulled back to Emerson in 1929, eliminating rail service to the Village after only 20 years of service.

Photo Info/Credit: Top, the D&M depot at Hillman. According to markings on the photo this was a picnic being held at the depot. August, 1910. [Alan Loftis collection]