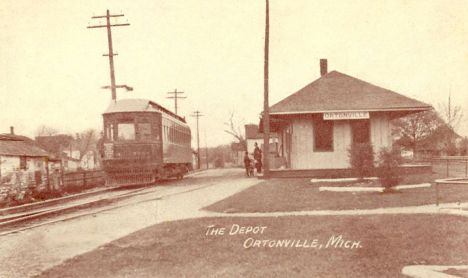 Ortonville was located in north central Oakland County. It was served for a period of time by an interurban line which ran from Oxford through Ortonville to Flint.

Sixty-Two are Injured; One, A Boy, Will Die.

Failure of Work Train's Crew to Obey Orders the Cause - Special Car Was loaded with Flint People Coming to Windsor.

Because of a car crew's carelessness, one person is fatally hurt, seven are seriously injured and 54 others are suffering from hurts of lesser degree.

All this happened on the D.U.R., one mile south of Ortonville, shortly after 9 o'clock this morning, when a special car, southbound, collided head-on with a work train going in the opposite direction. The special car carried about 90 passengers, all bound for the Orangemen's celebration at Windsor, Ont. The work train was hauled by a snowplow, and when the impact came to the prow of this plowed into the passenger car, splitting it open down the middle from end to end.

Men and women were piled together in heaps and so tangled with the wreckage that work of extricating them was a long and delicate job. The commonest injury was broken legs, caused by the heavy seats being torn from their fastenings and tossed bout among the crowd of passengers.

The woodwork of the passenger coach was smashed to splinters, which cut and tore the flesh of the imprisoned people, and when the work of rescue began by those who had escaped injury and the farmers of the neighborhood it was a terrible scene of carnage that met their eyes.

One of the passengers, a veteran of the civil war, said that it resembled in this respect the after scenes of hand-to hand conflicts such as he had witnessed on the southern battlefields.

As fast a the injured were removed from the wreckage they were laid out on the grass beside the right of way awaiting the arrival of relief cars. The most seriously hurt were removed to farmhouses nearby for better care. Physicians were summoned from Oxford and Flint, and special cars sent out from here [Flint] to bring the injured to this city.

These cars, on their arrival here, presented a terrible spectacle and battered human beings were seated or laid out on improvised stretchers, waiting their turn to be removed from the cars. Some had arms in slings, others wore bandages around their heads through which the blood from ugly cuts beneath oozed. The clothing of many, soaked with their own or their fellow passengers' blood, was torn to shreds by the splintered woodwork and glass of the wrecked car.

Some One's Carelessness to Blame.

The cause of the wreck was carelessness of the crew of the work train. The had orders to sidetrack at the switch about a mile south of Ortonville to let two sections of the regular southbound and the Orangemen's special car pass. Two cars passed and a member of the train crew, in response to a query from Gus Frahm, motorman of the work train, stated that the third car had passed. Frahm started his train north at once, without waiting to ascertain whether the car which had just passed was the last car or not.

The train consisted of the trolley car and four flat cars, and was going at a high rate of speed when it reached Wilkes crossing just south of Ortonville. The road curves at this point, and as the special car approached the curve the motorman, John McGregor, got a glimpse of the work train. He threw on the brakes, but the distance was too short and the speed of both the special car and the work train too great. When he saw that a collision was inevitable McGregor attempted to jump, but was too late. Motorman Gus Frahm, of the work train, jumped and escaped injury, although he is reportedly completely unnerved by the shock. The conductor of the work train, Andrew Holstein, stuck to the car and suffered a broken arm and broken leg.

Boy the Most Seriously Hurt

The most seriously injured of all is Willie Hibbard, of [Flint], the 10-year-old son of Selah Hibbard, who was also hurt. Willie's hip was crushed, and he is badly hurt internally, and it is not thought he can recover.

THIRTEEN STILL IN THE HOSPITAL

Complete returns of the list of injured in the D.U.R. wreck at Ortonville Tuesday show that 76 persons sustained injuries, several names being added to the list compiled yesterday. None of these is seriously injured. There were 35 persons on the car.

Thirteen of the passengers are in Hurley hospital, and 11 who were treated there have been taken home.

Willie Hibbard, who sustained the most serious injures, is still alive with no change in his condition.

Lansing, Mich. July 13. The frequent wrecks on the various branches of the D.U.R. lines resulting in loss of lives and many injuries has stirred the state railroad commission to action and Mechanical Engineer James Bice was sent to Ortonville today to investigate the wreck which occurred Tuesday. [DFP-7/14/1910]