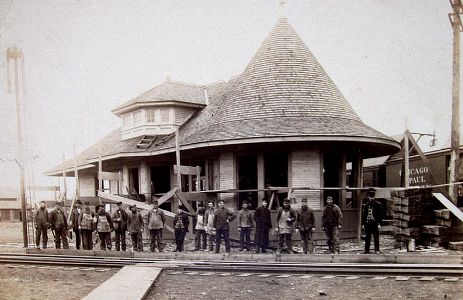 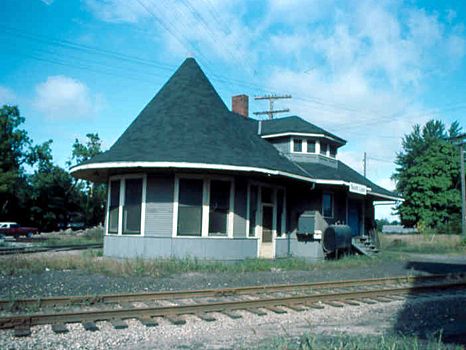 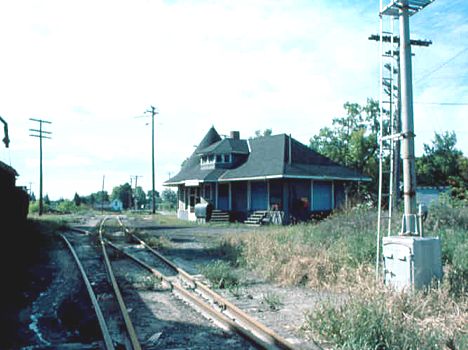 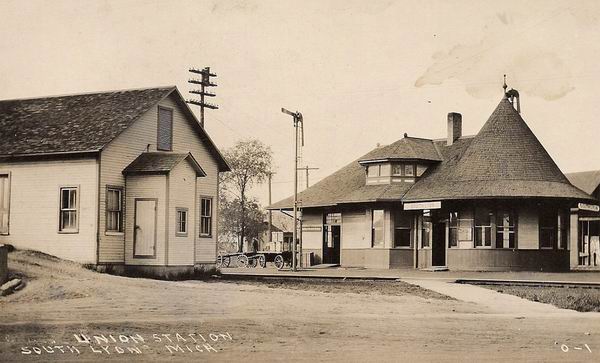 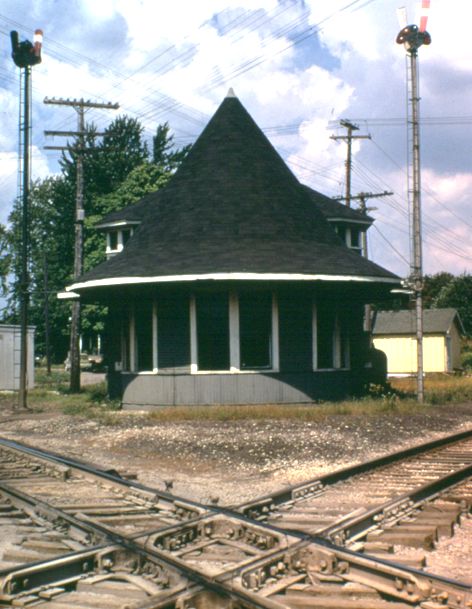 South Lyon was founded in 1832 and was called Thompson's Corners.  In the same year, the surrounding township was named Lyon for Lucius Lyon a member of the State Legislature.  The village was given a name for its location within the township.  South Lyon was incorporated as a village in 1873 and as a city in 1930.

South Lyon was home at one time to three railroads.

In the summer of 1871, the Detroit, Lansing and Northern was built west from Plymouth on the way to Lansing and Ionia. In 1880, the predecessor to the Ann Arbor Railroad built a line into town from Ann Arbor.  The goal of this line was to continue on towards Pontiac but that did not occur under the original owners. The line was pulled up around 1890. In 1883 the Grand Trunk built their Jackson Branch from Pontiac to Jackson, which crossed the Pere Marquette near the elevator (photo above). The GTW branch line continued to serve South Lyon until the early 1980's. The branch line is now a paved bicycle trail through town and Reynold Sweet Parkway follows the original route. Today, South Lyon hosts the CSX main line from Detroit to Grand Rapids, and a passing track is located there.

After the first DL&N depot was destroyed by fire, the PM and GTW built a union station to serve both roads. The depot used a "witch's hat" design, which was also used at a few other locations in Michigan. In the mid-1970's, the depot was moved from its track-side location and became the center piece of a historic park in the City about 1/2 mile away.

The largest industry in South Lyon was the Michigan Seamless Tube Company, which established a tube/pipe factory here before World War II. The plant was served by the GTW Jackson Branch on the west side of town. The plant had several sidings. In later years, scrap steel was loaded here from the plant for recycling.

Photo Info/Credit: Top, the South Lyon station under construction. This depot replaced a smaller depot which had burned down. [South Lyon Historical Society]. 2nd and 3rd photos, the depot iln the 1970's. The first taken from the east side. The track in the foreground is the GTW Jackson branch. The C&O main line from Plymouth to Grand Rapids is behind the depot. The 3rd photo is taken from the GTW right-of-way, looking south past the depot and across the C&O diamond. What looks like a crossing before the depot is a road. The interlocking signal post for the crossing is at the right. The siding branching off to the left is the interchange track with the C&O. 4th photo, a view of the union depot and freight house. 5th photo, a vertical view of the station and track diamond in 1972. [Craig Gardner]

1890. The DL&N installs a new stock yard at South Lyon. They also repaired and painted the passenger house. [DL&N-1890]