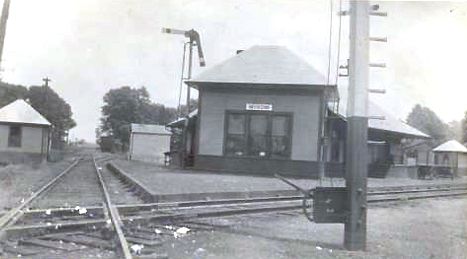 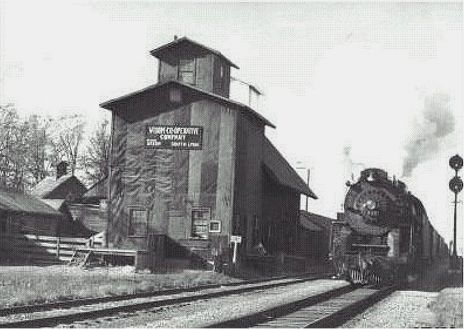 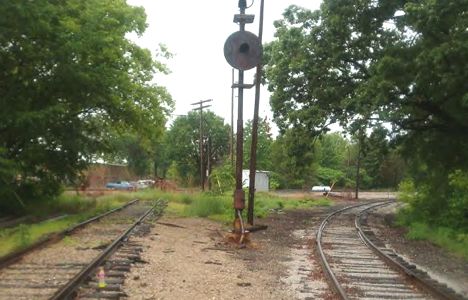 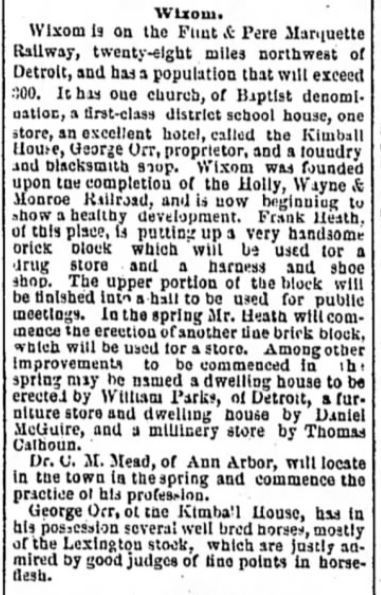 Wixom is located in southwest Oakland County and was the crossing of two railroad lines. The former Pere Marquette (later C&O/CSX) line from Plymouth to Flint crossed the Grant Trunk Western's Jackson Branch just north of what is now Pontiac Trail.

Photo Info/Credit: Top, an old photo of the Wixom depot which served both the Pere Marquette and the Grand Trunk Western erailroads. The control at the right is believed to have been used to change a target or bball signal at the top of the pole which controlled access to cross the diamond. [Alan Loftis collection]. 2nd photo, a Pere Merquette passenger train leave the Wixom depot; 3rd, a Pere Marquette "Berkshire" steam engine leads a freight train across the GTW diamond at Wixom. The elevator is on the left. 4th photo, the remnants of the Wixom interlocking looking west on the former Grand Trunk Western. The GTW Jackson branch is at the left (pulled up before the crossing). The old searchlight signal proteting the crossing is still in place. The track to the right is the Coe Rail/CSX interchange wye. In 2004. [Mike Tabone] Bottom, an article from the Detroit Free Press in 1874]

1898: Wixom was a regular station stop on the F&PM with a daytime agent at the depot. There were also coaling facilities here at that time.

December 28, 1901. Willard Wixom, a prominent businessman, was killed by the fast express on the Pere Marquette railroad, going south about 10 o'clock. The accident happened at the crossing a few rods south of the village of Wixom, a place named for Mr. Wixom. His horse was also killed. He was mangled almost beyond recognition. [Sebewaing Blade-1901-1228]