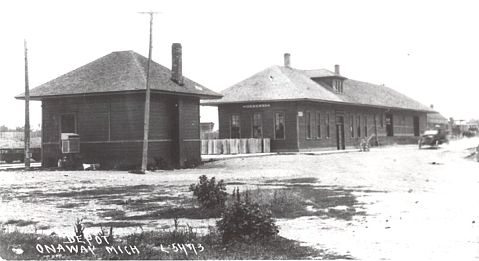 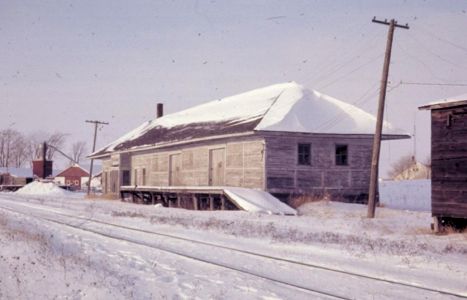 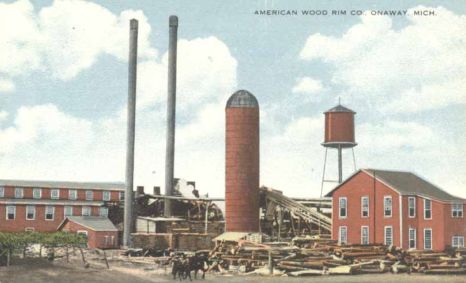 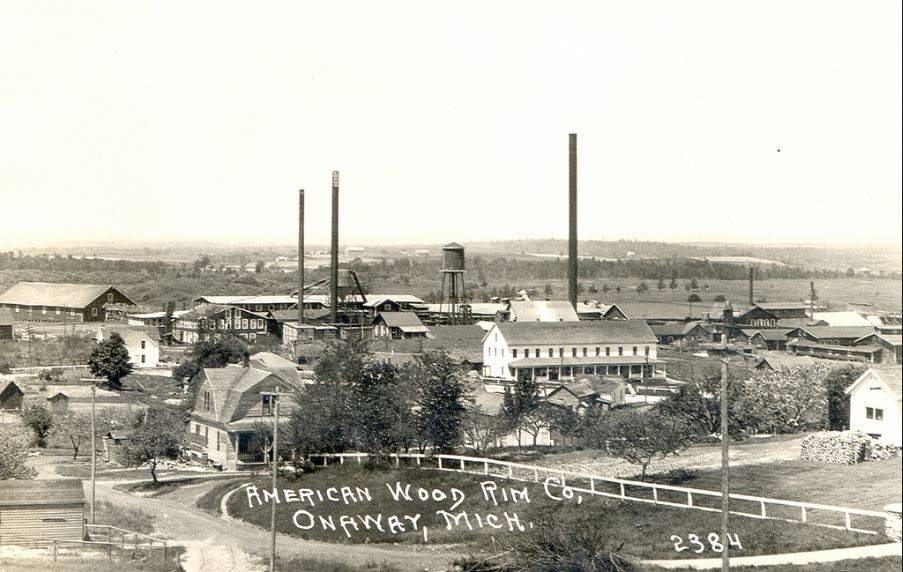 Onaway was first settled about 1882 and called Shaw. A village was platted called Onaway in 1886. The town was incorporated as a village in 1899 and became a city in 1903. [MPN]

Onaway was served by two railroads. The major road was the Detroit & Mackinac railroad which came through here from Alpena enroute to Cheboygan. The D&M had many forest branch lines around the turn of the century. It also built a branch from here north to a gravel quarry near Black Lake.

The second road here was the Onaway & Northern which was a short line which ran north and south of the D&M. The O&N brought hardwoods in from the forest to the American Rim Co. and other industries in town. It reportedly used "dummy" locomotives, which are small switchers which hauled a tank of water over the boiler.

American Wood Rim used hardwood to make steering wheels and tire rims for the early auto industry. It put Onaway on the map as "The Town That Steers The World". The plant burned down in 1926 and Onaway immediately lost about half its population.

January 22, 1900. Fatal Accident. An accident to a log train on the Alpena & Northern [D&M] railroad near Onaway resulted in killing Conductor William Dunlap and injuring William Greenfield and Lee Belnap, lumbermen. The injuries to Greenfield may prove fatal. The men were riding in the way-car when the car and the car of logs just ahead of it jumped the track. The brakeman jumped from the train, this escaping injuries. Before the others could follow him the car and the flat car loaded with logs went down a twelve-foot embankment. The men were taken back to Onaway and a speial train with physicians was sent from Alpena at once. The cause of the cars leaving the track is not clear. [Detroit Free Press]

April 29, 1903. Fire threatening. The New York Times reported that forest fires threatened the destreuction of the city. "In every direction the woods are ablaze." Citizens fought the flames to keep them from the lumber yards and plant of the Lobdell & Bailey Manufacturing Company, the town's principle employer. High winds from the southwest prevailed. Log trains were kept busy all night bringing in people rescued from the fire along the track. The smoke is so dense as to be suffocating and the sun's rays glow dimly through it, casting a yellow shadow. Burned cinders and charred embers fill the air. Unless night falls tonight, the result will be serious. [NYT-4/30/1903]

October 29, 1911.  The American Wood Rim company, of Onaway, has the distinction of turning out most of the steering wheels used by the [automobile] trade. This concern last year manufactured upward of 200,000 steering wheels. They finish them complete from the tree, ready for the machine, with either aluminium or brass spiders. For exceptionally fine cars they import mahogany and Circassian walnut.

The manufacture of bicycle rims is also a leading branch of their work, their output last year being nearly a million rims. They have a factory in France to which they export the material in the rough. Allied with the Rim company is the Lobdell & Churchill Manufacturing company, which operates an immense saw mill, handle and flooring factory. The combined company owns 20,000 acres of virgin timber land containing the finest maple in the world. They employ nearly 700 men in their mills and in the woods. [DFP-10/29/1911]

External Article: The History of Onaway