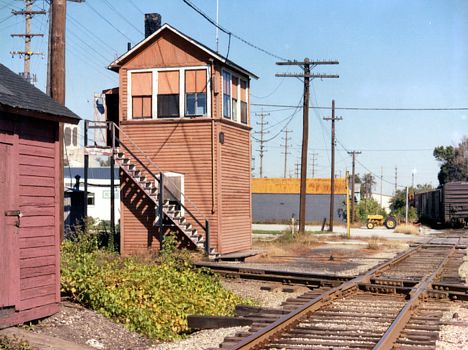 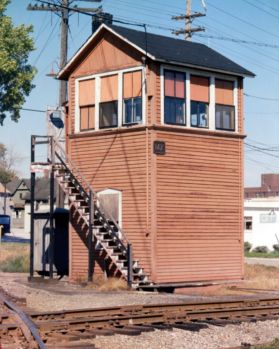 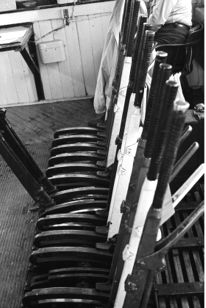 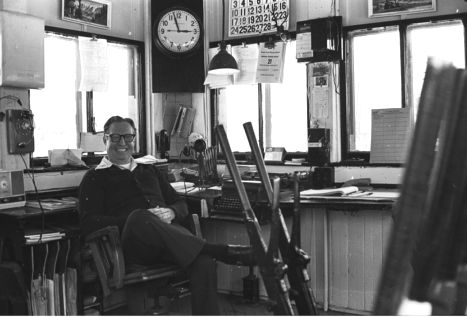 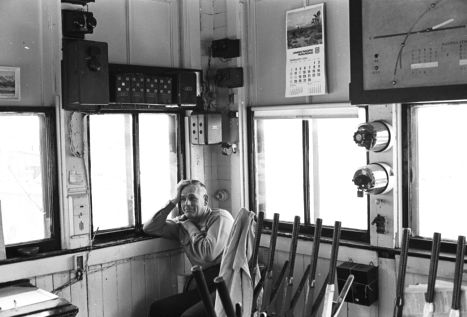 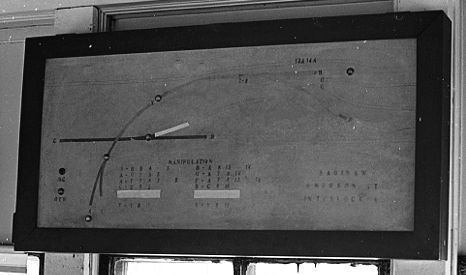 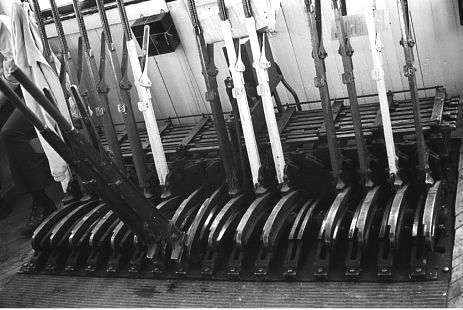 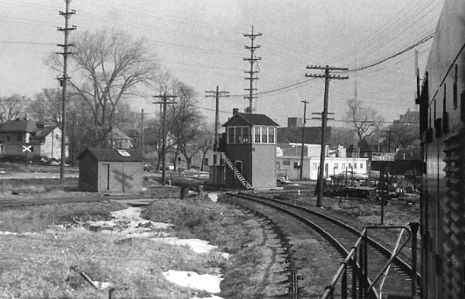 These photographs, from the collection of Robert W. Smith, appear to be taken in the 1960's. The tower was staffed by the Grand Trunk Western, and was likely not a 24-hour interlocker by the time these photographs were taken.

Around 1942, the GTW arranged to use the Michigan Central drawbridge over the river, and stopped using their own drawbridge which was just north of the MC bridge.  After the trackage rights on the MC were arranged, the GTW main line was reduced to an industrial spur along the river north towards downtown.  We believe that the first (top) photograph is taken looking north, with the box cars on the former GTW main line.  A 1961 GTW Employee timetable shows the tower only open from 0800 to 1600, Monday through Friday - to allow the switching of industry on the line beyond the tower.

A close look at the photos reveals some things of interest:  1) the tower appears to have only one pipe protruding from it to control signals or switches.  2) there are a number of examples of 20th century communications devices in the tower for both the MC and the GTW;  3) the track diagram ("model board") shows one of the most simple interlockings in Michigan, but there are some switches and derails that no doubt have been removed over the years.  4) Though not well marked, the connection between the MC and the GTW (top right of model board) is known as Meredith Street. [All photos:  Robert W. Smith Collection]

Comments about the above photo from Charles Geletzke, Jr:  March 24, 1967.  "Once again we are aboard GTW Tr. #531 (Extra 4134 North) "The Salt Line," and are about to pass the GTW-NYC MX Tower in Saginaw, MI.  This was a GTW tower manned by a GTW operator.  It was a train order office for the GTW and additionally issued NYC clearances and orders for GTW trains running on NYC trackage rights between MX and Mershon.  The tower was dismantled in 1976 after the formation of Conrail and GTW's acquisition of all former NYC-PC trackage in the Tri-City area.  Around the curve to the left, we will utilize the NYC's swing-bridge to cross the Saginaw River.  This bridge was not a manned bridge, and should a boat need to have the bridge opened, they would have to contact the U.S. Coast Guard, who in turn would contact the NYC.  I do not personally know of the bridge ever having been opened during my railroad career.  The GTW used this route when their own bridge over the Saginaw River was dismantled.

The white building to the right rear of the tower was GTW's Saginaw Freight Office.  Newly constructed only several years earlier, this structure replaced GTW's own beautiful, but highly inefficient old wooden depot.  The freight office and all operations on the GTW in Saginaw were managed by an Agent.  It was not until April 1976 that the GTW placed a Trainmaster here.  Incidentally, I was the first GTW trainmaster here and served only from April through May 1976.

Prior to the PC acquisition, the GTW only had one yard crew at Saginaw.  They went to work at 8:00 a.m.  The GTW had a perpetual problem with service north of the river prior to April, 1976.  The conductor would always go over the River first thing in the morning.  Cars that arrived on the "Salt Line," usually about 10:00 a.m. would be switched out; but would never be delivered north of the River until the next morning.  This often presented problems with GTW customers.  When GTW took over the PC in this area, it now had two yard jobs, both working days, and this problem ceased.

Just north of the tower the GTW also had a wooden freight house, and the NYC had one of their own immediately to the east of it.

Saginaw was an interesting place to work and in April and May of 1976, it was not uncommon for us to handle close to 100-cars a day locally!  Generally, about 40 of these were interchanged to the C&O.