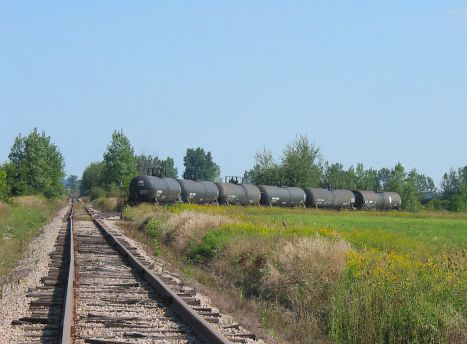 Poland is a junction point on the Port Huron & Northwestern railroad (later PM, C&O, HESR) just north of Carsonville. The railroad had a branch line which left to the west to Sandusky from here.

Photo Info/Credit: Top, what is left of Poland in 2002. This was the location of the beginning of a shorr branch line to Sandusky. The track is pulled up just west of this wye, which us used for tank car storage. [Dale Berry]

Poland area note: There is a former 70' turntable bridge that was used to replace an ancient wooden structure over the Black River near Poland, Michigan.  T. J. Gaffney, former Curator of Collections at the Port Museum speculates that it came from the west side of the state, perhaps Manistee, Benton Harbor or Muskegon.

Interesting note: A 70 foot turntable was used to replace an ancient wooden structure over the Black River near Poland, which was the location where the Pere Marquette's branch line veered off to Sandusky. T. J. Gaffney, the Curator of Collections for the Port Huron Museum, guesses that the bridge was formally a turntable from the west side of the state, perhaps Manistee, Benton Harbor or Muskegon.