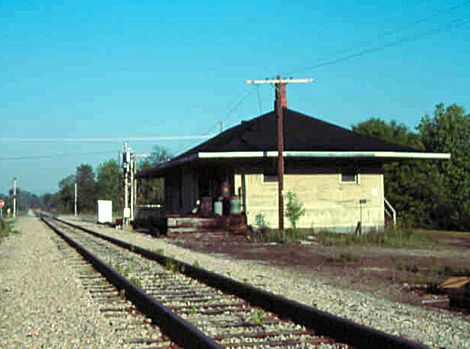 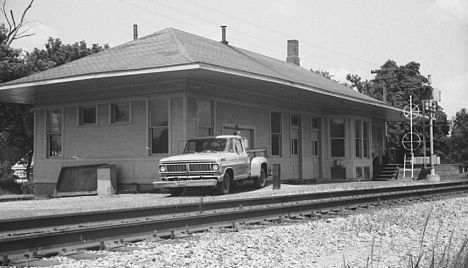 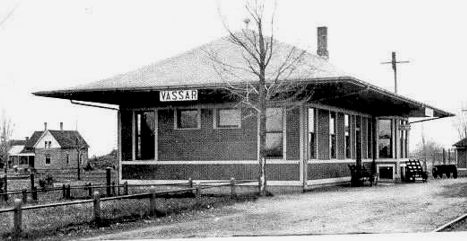 Posted by Doug Hefty, operator for the C&O in the 1970's on 12/21/2005:  A typical day as agent/operator at Vasser started at 7:00 am and ended at 4;00 pm with an hour for lunch.  When you report for duty, you would first call the dispatcher and ask how he wanted the train order signal displayed.  If nothing was close, red east and west was the usual order.  Then you'd usually grab the camera and head over to Super Foods to photograph the damaged goods (foodstuffs) that they were unloading.  This was always a constant problem and you had to document it for the OS&D (over, short and damaged) reports.  You'd write the car initial and number on a chalkboard to include in the photo.  Then on the way back to the depot, you'd check the wye to see what empties the Penn Central had shoved over to be picked up.  Back at the depot, you'd put on the headphones especially on Monday-Wednesday-Friday because when the east local got to Gera, the conductor would give all the waybills to the operator and he would tell us exactly what cars we had coming that day.  Marlette and Yale would be on the line, as well.  At Vassar, you handled Vassar proper as well as Great Lakes sand, Juniata siding, McHale Sand Pit and Mayville.  Sometimes you'd have to copy orders for the local.  Then you'd type up a switch list for the local and other paper work for inbound cars.  Once the cars for the PC were on the wye, you'd do an interchange report and then check the cars physically and record the seal numbers on the doors of all the loads.  At some point, you would take the interchange sheet over to the PC agent at their depot.  The rest of the morning was usually spent making out lists of damaged goods from Super Foods that were sold for pennies on the dollar to a food wholesaler in Saginaw.  This was something you rarely could keep up on, and every week the guy would come in and write a check for a portion of it.  In the afternoon, you'd usually take a drive and check Great Lakes Sand and Mayville (elevator and Moorman's).  On days the local was coming west there were usually sand loads to pick up and you'd put the switch list and waybills in the box at Great Lakes as well as a list of work at Vassar.  Sometimes you'd had to make a second trip to Super Foods with your camera as they were opening the cars.  The railroad liked you to get the pictures right away, rather than later, since some of the damage may have been caused by their forklifts rather than in transit.  Normally, you'd also see the westbound through freight from Port Huron at some point and it could be anytime from morning to early afternoon.  I had to stand outside the depot with a red flag in hand in case you saw anything that warranted stopping the train.  You'd wave a stop signal to the rear end.  For any empties, you'd have to call the car distributor in Saginaw to get a routing and you'd usually talk to the yardmaster or customer service to trace inbound cars.  the car distributor also got a report every morning of cars you had on hand and their status and you'd order emptes from him for grain cars, etc.  You'd notify the dispatcher before closing at the end of the day, clear the train order signal, and then report to the dispatcher "clear boards and good night" and turn out the lights.