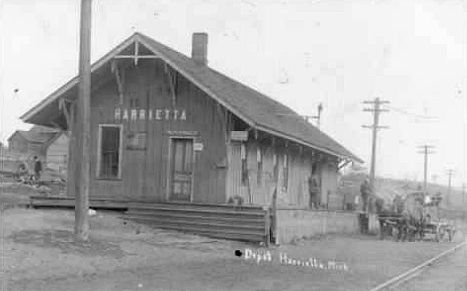 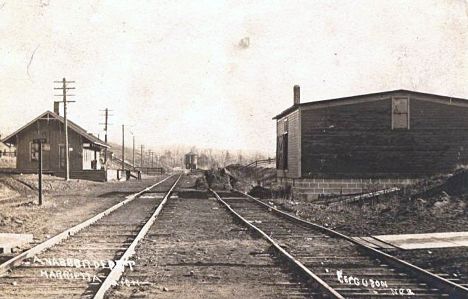 Harrietta was settled in 1874 as Springdale and later became Harrietta. The town is located about six miles southeast of Yuma and 18 miles west of Cadillac. The Toledo, Ann Arbor & Northern railroad came through in 1889. [MPN]

Photo info/credit: Top, the AA railroad depot at Harrietta. 2nd photo, another view of the depot with what appears to be a freight house or warehouse and a water tower down the track. [Both, Alan Loftis collection]

Harrietta was named for a railroad builder who constructed part of the Ann Arbor Railroad through Wexford County.  The village was incorporated in 1891 and briefly renamed Gaston.  Manufacturing establishments in Harrietta included a sawmill, stove factory, and a chemical plant for the manufacture of alcohol and other wood by-products.  In 1901 the state built a fish hatchery on Slagle Creek near the village.

In 1890, the Detroit Free Press reported that this village was platted about the time that General Manager Harry W. Ashley of the Toledo, Ann Arbor & North Michigan railroad was married to Miss Burt, of Saginaw. It was supposedly a combination of Harry and Etta, in honor of the bride and groom. Ashley later denied this. The place had a population of about 500 and has two saw-mills, Jordan and Morgan's operated a handle factory and a table-leg factory here. [DFP-1890-0104]