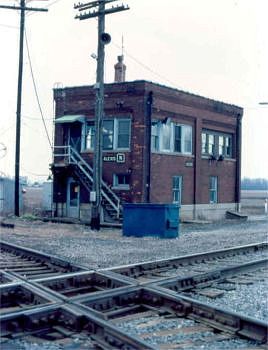 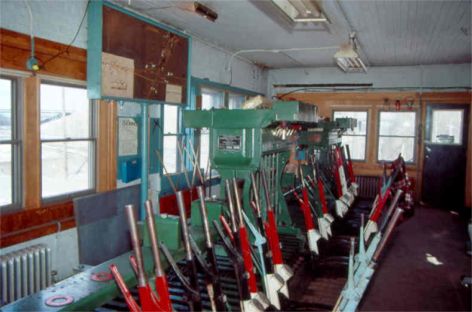 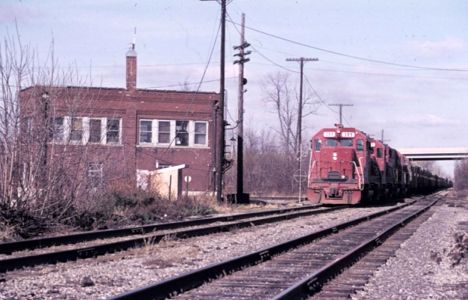 Alexis Interlocking Tower was at the crossing of the NYC Detroit line and the Ann Arbor/ PRR and Pere Marquette lines heading north and northwest out of the city. This was a NYC tower.

Photo info/credit: Top, Alexis Tower on the north side of Toledo, Ohio.  This tower protected the crossing of both NYC main lines to Detroit as well as the Ann Arbor Railroad and the C&O.  In its heyday, the tower also saw trains of the Pennsylvania Railroad. 1983. 2nd photo, the interlocking plant in Alexis was a combination of "strongarm" type, as well as two additional electric interlocking machines (green units).  These may have controlled nearby interlockings such as "K", just south of Alexis. 1989. [Both, Charlie Whipp]; 3rd photo an Ann Arbor railroad train passes Alexis Tower (under Conrail ownership) in 1979. Charles Geletzke Jr. photo.

1917, The MC had an towerman-operator here around-the-clock. [TRT]

1925. The Michigan Central adds 12 electromechanical levers to this interlocking. [RSC-1925]