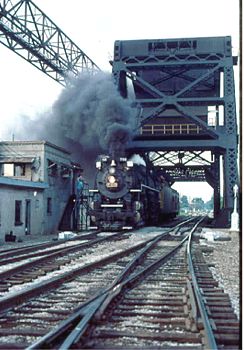 Photo info: Top, this is the west end of the Norfolk Southern Rouge Bridge. NKP 765 is westbound at full steam on August 14, 1983 with an excursion train. [Charlie Whipp]

The drawbridge (#714) was rebuilt by Midwest Steel Company in 1981 and 1982.  In January, 1982, six switch engines stored at Oakwood Yard were placed on the bridge to keep the span down while the counterweight was disconnected and new beams were placed. [IT-2/82].

The NS Bridge operator also controls the NS (former Wabash line) line from west of Delray to Manifest Yard, including the entrance to the Foreman Wye, the crossing of the Junction Yard branch, and the junction with the CN line to Toledo (former Detroit & Toledo Shore Line).

This bridge brings the Norfolk Southern over the Rouge River between Delray and Oakwood Yard (on the old Wabash line west to Montpelier).  The bridge has an operator 24/7.  It is a bascule design.  The bridge was rebuilt by the Midwest Steel Company in 1982.  Six switch engines stored at Oakwood Yard were placed on the bridge to keep the span down while the counterweight was disconnected and new beams were placed according to Inside Track Magazine, 2/1982.

The bridge was originally built by the Wabash Railroad, along with the Detroit & Toledo Shore Line Railroad.

1920s. The Pennsylvania Railroad also began using the bridge in the 1920's.

December 16, 1065. Dangles 150 feet Over River, Lives. An unidentified woman dangled 150' above the Rouge River for 15 agaonizing minutes Wednesday clinging to a raised railroad drawbridge.  The woman fled after the bridge was lowered. She refused to give her name.

The bridge, a Wabash Railroad facility, crosses the Rouge between W. Fort and W. Jefferson. It is not a pedestrian crossing.  Bridge attendant Jewelle Farmer, 60, of 1746 Michigan, Lincoln Park, said he raised the bridge shortly before noon to allow a freighter to pass.

"I had blown the warning siren to warn workmen off the bridge," Farmer said, "but apparently she ignored it. The first I knew she was on there was after the bridge was up and workmen started hollering at me.

"But by then there was nothing I could do until the freighter passed," he said. The woman was holding on to upraised cross-sections of the railroad ties.

Farmer told River Rouge police the woman was not hurt. "She was crying though", he said, "because she had dropped a box containing a pet cat into the river". The woman was described as about 55. [DFP-1965-1216]