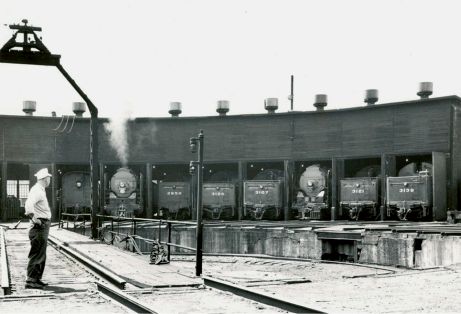 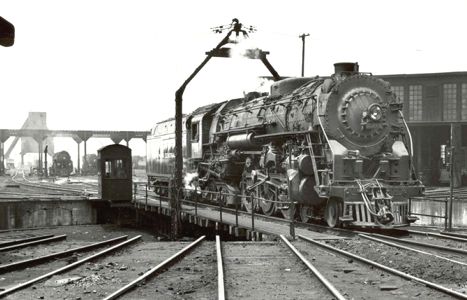 The Michigan Central had two large roundhouses along their main line at Livernois Avenue in Detroit. Day to day locomotive service was performed here. Major repairs were taken to Jackson (or St. Thomas, Ontario for Canada-based locom

Photo info/credit: Top, one of two giant New York Central Livernois Roundhouses in 1954. This is E. L. Novak who is moving on the turntable to position it to extract a steam engine for service on the road.  Novak, an train service employee on the NYC, always had his camera handy and captured some of the best of Michigan's railroad history. [Charlie Whipp collection] 2nd photo, New York Central locomotive 5282, a J1d Class Hudson, is turned on one of the two large turntables in Detroit's Livernois Yard in 1953. To the left, in the distance, are two other locomotives at the locomotive servicing area, and the giant coal dock can be observed in the background. Livernois, with two very large roundhouses, was one off the largest and busiest railroad yards in the United States, and the busiest in Michigan. The complex dates back before 1900. [E L Novak/[Charlie Whipp collection]

The MC had two turntables at the Livernois Yard engine house.

Struck It. - Te parties engaged by the Michigan Central Railroad Compay to bore for a flowing vein of water on the premises of the car works near the Junction succeeded in striking it on Saturday. After it was struck, the well, twelve feet in diameter and sixty feet in depth, instantly filled up and flowed over the top. The well adjoins the roundhouse, and the water will be pumped into large tanks to supply the engines. [DFP-1/20/1874]

11 locomotives are damaged; MC calls engines from out of state to maintain schedules.

FBI agents, Army and Navy intelligence officers and members of the police arson squad immediately started an investigation into the possibility of sabotage aimed at the destruction of badly needed railway equipment.

Flames shooting 100 feet in the air, accompanied by blasts of steam from locomotives ready to roll and the shrill screech of locomotive whistles, had turned the eastern section of the huge roundhouse into an inferno when the first fireman reached the scene.

The roundhouse is located near Livernois between Ranspack and Federal.

For alarms were turned in between 9:19 p.m. when William Hallerran, a Michigan Central policeman, first discovered the blaze.

Railway officials, were unable to estimate the amount of damage, said that the 11 engines were so seriously damaged that all have to be torn down, checked and rebuilt.

45 engines in another part of the roundhouse, which is separated by a partition from the damaged section, were not affected and will be pressed into service, along with others to be rushed from Jackson and other nearby cities, to maintain schedules.

All of those damaged were passenger and freight locomotives. Several were scheduled for runs on Monday night and already had steamed up.

Flammable parts of the locomotives were set a fire and burning fragments of the roof fell on them. While most of the roundhouse is of brick, wood framing quickly burned into blaze and carried the fire to the roof

More than 100 firemen and 22 pieces of equipment, led by the department's new chief John A. Keefe, brought the fire under control within an hour.

At its height the blaze was visible for miles and brought a large crowd of spectators who were kept far back by more than 50 Detroit patrolmen on extra guard duty and railroad police, who feared the possibility of explosions in the "live" engines.

All the presence of Army, Navy and FBI investigators at the scene hinted of possible arson, Inspector George Smith, of the police arson squad, said the cause was, as yet, undetermined. "We have no theories on it at the present time," he declared.

Company officials, led by J. L. McKee, vice president, and Ralph DeForest, superintendent, went to the scene immediately upon learning of the fire, but were unable to give any estimates of the damage. [DFP-12/29/1942]