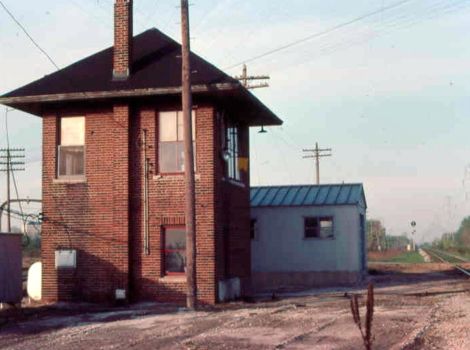 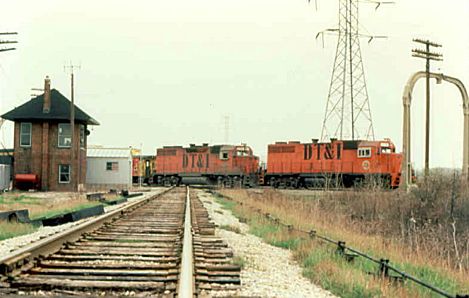 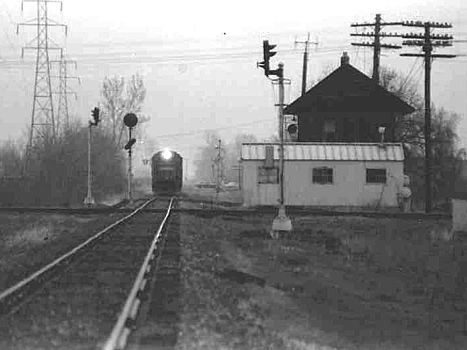 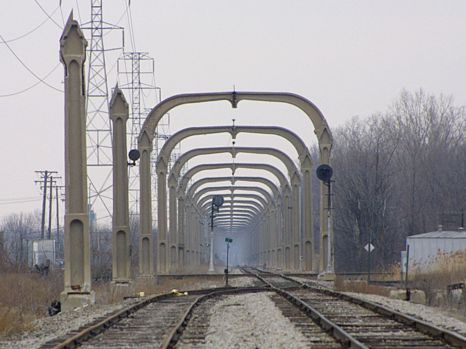 Penford Junction was the interlocked crossing of the Pennsylvania Railroad and the Detroit, Toledo & Ironton railroad in Taylor. This was a PRR operated interlocking tower, which no longer exists. It was noted for its PRR-style position light signals on the PRR line which were very uncommon in Detroit. The crossing had one connection in the southeast quadrant of the crossing.

This was one of the last new interlocking towers built in Michigan as neither the PRR or DT&I came to this location until the early 1920's. The DT&I was owned at the time by Henry Ford, hence the name PenFORD. The tower was torn down in 1986.

Phot info/credit: Top, Penford Tower was the crossing of the Pennsylvania Railroad and the Detroit, Toledo & Ironton in Taylor, Michigan.  This was one of the last new interlocking towers built in Michigan as the neither the PRR or the DT&I was built at this location until the early 1920's. 2nd photo, showing the DT&I electrical cement catanary posts which held overhead power supply wires for brief electric operations in the late 1920's. Early 1980's. [Charlie Whipp] 3rd photo, Penford Jct. just before automation. The Conrail freight is approaching on the former PRR line. Note the traditional PRR position signals are about to be replaced by tri-color signals.  The tower will be closed in a matter of weeks. [Charlie Whipp]. 4th photo, in 2003, the Penford Interlocking, with the DT&I concrete structures lining the tracks north towards Dearborn and the Ford Rouge plant. [Dale Berry]

April 1, 1930: The Michigan Public Utilities Commission inspects and approves for use an update at the Penford Interlocking, known as "RK" interlocking. [MPUC-1930]