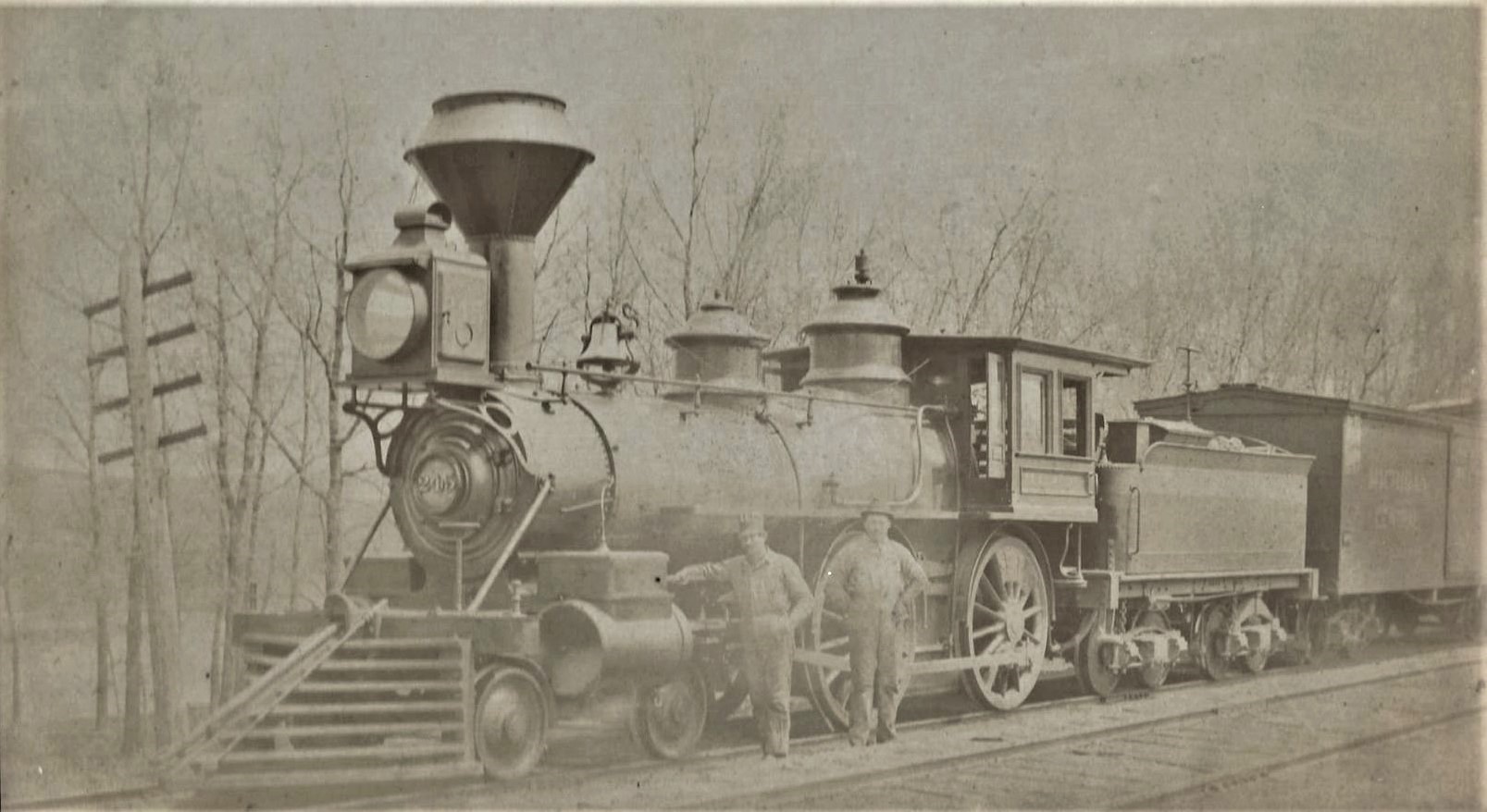 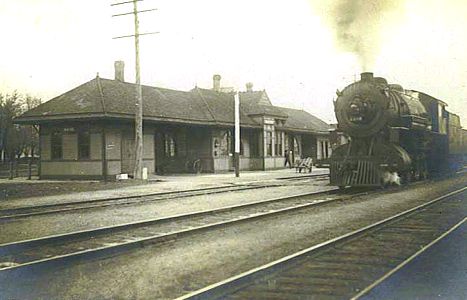 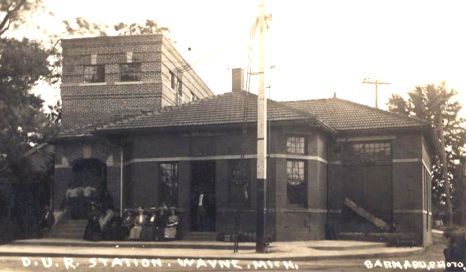 The Wayne area, in western Wayne County, was settled about 1824 and known early on as Derby's Corners and then South Nankin. A log house was built here early on for entertaining and feeding travelers. The town was renamed Wayne in 1851, became a village in 1869 and a city in 1960. [MP]

Wayne was a crossing of the east-west Michigan Central main line to Chicago, and the north-south Pere Marquette railroad's line from Toledo to Ludington via Saginaw. The town also hosted an interurban railroad which ran along what is now Michigan Avenue. The interurban also ran north to Plymouth and Northville.

Photo info: Top, an early locomotive - believed to be from the MCRR - at Wayne. [ Wayne Historical Society]. 2nd, the Michigan Central Railroad station at Wayne, Michigan, with a switch engine in front. 3rd photo, the DUR interurban depot at Wayne. [Both, Alan Loftis collection]

1838 - The Central railroad (later Michigan Central in 1846) arrives at Wayne and is built as far as Ypsilanti.

1871 - The Flint & Pere Marquette builds through Wayne on their route from Saginaw to Monroe (and later Toledo).

1882. At 3 o'clock yesterday morning a party of five burglars effected an entrance into the station of the MCRR at Wayne and attempted to blow open the safe, but were frightened off by a man named Jackson sleeping therein. They then stole a horse and buggy and drove for two miles when they deserted the rig. [DFP-1882-0630]

1920 - On the Michigan Central, this is a passenger, freight and express agency joint with the American Railway Express Company. Interline tickets are issued. S. Armstrong is the agent. The telegraph call sign is "RN". [MCOAS]

1—That said Railroad Company may be required by the order of the Commission to furnish and provide daily and reasonably adequate service and facilities, within said village of Wayne, and to provide and furnish daily transportation of passengers and property over its railroad from the village of Wayne to other points upon its railroad.

The case came on to be heard and the testimony was taken therein on March 26th. Upon the hearing it appeared that formerly the Pere Marquette Railway Company ran trains south from Plymouth to Toledo, passing through Wayne, and that without any order of the Commission, the railway company ceased this operation and any passenger trains coming from the north and from the west, headed east through Plymouth are not operated over its road through Wayne, but are continued directly into Detroit; and that its trains from the south which formerly passed through Wayne are diverted at Romulus and run into Detroit.

Wayne is served by the main line of the Michigan Central Railroad operating between Detroit and Chicago, by the Detroit, Jackson and Chicago Railway, a part of the Detroit United Railway system, and a cement road runs from Wayne to the city of Detroit over which various bus lines are operated.

It appears that in the summer, resort trains from Cincinnati go by way of Toledo, Wayne, Plymouth and Grand Rapids, north over what was formerly Chicago and Western Michigan Railway to northern resorts and return.

The principal complaints established by the testimony are, first, as to the mail service from Wayne to points south, like Romulus; and second, the inability of passengers from Romulus or points south of there to get to Wayne, except by a circuitous route through Detroit, and the question is, what under all the circumstances should be done.

What is reasonably adequate railroad service is a question of fact, depending upon all the circumstances surrounding the case. It is the claim of the railroad company that it did not discontinue furnishing passenger service to the public, but that the public voluntarily ceased to patronize its railroad between Plymouth and Romulus with its passenger traffic, and that it therefore rerouted its passenger trains.

It is significant that notwithstanding the operation of these passenger trains was discontinued several months ago, no complaint prior to the present one has ever been made to this Commission as to the want of reasonable and adequate passenger service by way of the Pere Marquette Railway through Wayne.

If there existed no demand for the service, the company ought not to be compelled to give it. There is no claim that the Pere Marquette Railway does not furnish reasonably adequate freight service over this line. While it may be true that technically the railroad company ought not to reroute its intrastate passenger trains without the consent of the Commission, with the operation of a railroad, involves a broad discretion upon the part of its operating official, and ought not, by an order of this Commission to be compelled to operate its trains at a loss.

Waiving all technicalities, the question is, what ought to be done under all the circumstances. There is a showing on the part of the village of Wayne that the operation of passenger trains between Romulus and Plymouth would accommodate some people. Local passenger traffic both north and south is being looked after at this time by bus lines.

The village of Wayne is served by the main line of the Michigan Central Rail. road and the Detroit, Jackson and Chicago Electric interurban railroad. It is on a cement state trunk line highway. The railroad line between Romulus and Plymouth never did a substantial amount of passenger business.

If there was a profitable passenger business between Romulus and Plymouth, we should have no hesitation in directing the railroad company to restore this passenger service. There is no substantial proof that there was or would be profitable passenger service between these points if local train service were restored. To compel the Pere Marquette Railway to rebuild a passenger station where there is no substantial amount of passenger business would be a needless expenditure of money upon the part of the railroad and a financial burden the incidence of which would be shifted to the shippers and passengers patronizing its railroad outside of those served at Wayne.

There is no reason why the general shipping and travelling public patronizing other parts of the Pere Marquette Railway should be burdened with the cost and expense of building and maintaining a passenger station which would not yield the railroad company sufficient revenue to warrant the expenditure.

The travelling public outside of those who might be served by the operation of this particular part of the Pere Marquette Railway ought not to be compelled to pay the burden of the losses which would be suffered by the Pere Marquette Railway in the increase in its operating expenses which would accrue by reason of the operation of its passenger trains over this line, upon which service was discontinued, because it did not yield sufficient to pay operating expenses. We think the petition under all the circumstances should be denied.