Mine: Tully Mine, Stambaugh, MI

Method: Underground; 3 shafts each up to 700' in depth, 4 levels. Connected with Baker Mine. 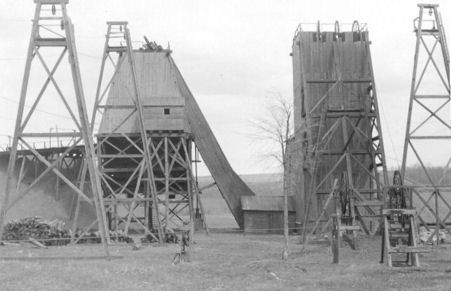 Photo info: An early view of the Tully Mine at Stambaugh. [MINART]

The Tully mine worked Young's ore body of the Riverton Iron-Formation during 1910 through 1926, operated by Corrigan McKinney Steel Co. 1.2 million tons of iron ore were shipped during this period. In 1949 the Hanna Iron Ore Co. combined the mine with the Bengal Mine to form the Bengal-Tully Mine, and in 1953, the complex was renamed Cannon Mine.

The Tully mine used three shafts of 700 ft depth, and four levels, with connection to the neighboring Baker Mine.

1911. The work at the Tully consists in sinking a shaft from surface through the overburden of 160 feet to the ledge. This work is almost finished, after sinking through 80 feet of hard pan, then through 80 feet of quicksand and handling 1,200 gallons of water per minute. This mine, as well as all the idle mines of the Corrigan, McKinney & Co. control, has complete surface equipment. [LSMI-1911]

1918. MILW had a railroad tower operator here on the day shift. [TRT] The location or reason for the tower is unknown.