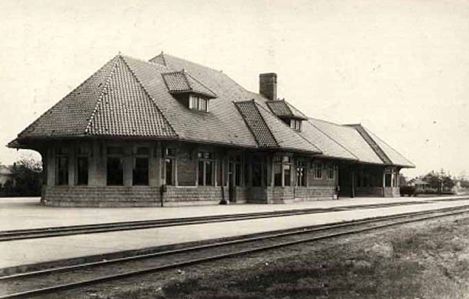 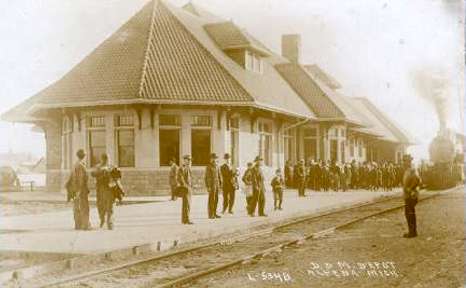 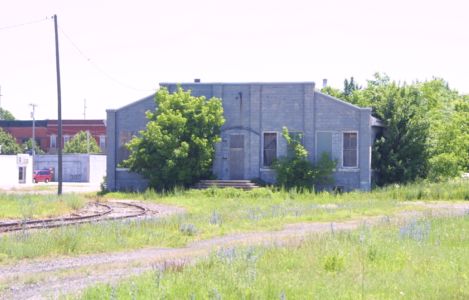 Alpena was settled around 1835 and originally called Freemont but was changed by the post office to Alpena. [MPN]  The first railroad communications from the south came in 1886 with the arrival of the Detroit, Bay City & Alpena.  The Alpena & Northern railroad was constructed northwest into the forests around 1893 after the area became a logging center at the mouth of the Thunder Bay River. The Huron Portland Cement Company began producing cement from the region's large limestone deposits in 1907. The Boyne City, Gaylord & Alpena railroad entered Alpena in about 1915.

Alpena had several railroad depots over the years for all three railroads. But quickly, the new D&M depot became the terminal for passenger trains to and from points in the lower peninsula and beyond.  The D&M also had a sizeable freight house on the north side of the river not far from Fletcher paper facilities.  The building continues to exist, used as a restaurant.

Photo Info: Top, a postcard view of the new depot with a northbound train.  Next, a black and white photo possibly taken for tax valuation purposes of the new depot. [Both, Alan Loftis collection] The third photo is an early shot of the depot with a northbound train and quite a crowd standing by. This photo was later made into a colorized postcard. [Dale Berry] Bottom, a view of the freight house.  The track going east on the left of the building is the approximate location of the A&N main line. At the time of this photo in the mid-1980's, it was an industrial spur to the former Fletcher paper mill on Alpena Bay. [Dale Berry]

1909. June 3. Joseph Jeskonski, 12, found an unoccupied engine in the D&M railway yards here, with 60 pounds of steam up, jumped aboard, pulled the throttle wide open and sent the locomotive spinning down the tannery track into a waiting freight train. The engine was demolished, and several cars reduced to splinters. The boy jumped and was slightly hurt. He was arrested by Detective Wyman and brought here before Probate Judge Campbell. He will be sent to Detroit. It was shown that he was one of a gang of youthful tramps who had looted freight cars in the same yards last March and had been let go on a suspended sentence. The loss to the engine and rolling stock is in the neighborhood of $3,000. [PHTH-19099-0603]

1910. The new station for the D&M railway at Alpena, designed by Architects Spier, Rohns & Gehrke, is to be a 50 x 122 feet, constructed of concrete, paving blocks and limestone with a Spanish tile roof. The waiting room will be finished in glazed tile wainscoting, mosaic floor and heavy open-timbered roof ceiling, large open fireplace. There will be a women's room with toilet and a smoking room with toilet. These rooms will be in glazed time with weathered oak. There will be indirect steam heat. [DFP-1910-0109]

1925. Rail Line Ousted from city streets. A long-drawn and bitterly fought war between the former Frank W. Gilcrist interests and the BCG&A railroad for possession of a part of the latter's right of way across Alpena streets, has been concluded in the circuit court with an order ousting the railroad from the property in dispute. Gilcrest was a one-time lumber magnate ad sawmill owner of Alpena and he began a limestone quarry project during his last years of life. In 1905, he closed his sawmill at the end of the mouth of the Thunder Bay river and decided to erect a plant and quarry the limestone deposits on some of his property. He planned a short railway as part of the project and began acquiring right of way. A few years later, before he had begun to build his road, the BCG&A was permitted to unload steel rails on Glchrist's dock and to smooth a temporary right of way through the Gilcrist tract. No road was built and in 1912 Gilcrist died. The Gilcrist estate guards blocked the crossing and the BCG&A drove them away and laid track at night without ballast. Mayor L. G. Dafoe called out the Alpena fire department who sprayed a stream of water on the railroad workers. The courts issued an injunction. [LSJ-1925-1204]

Note: Alpena had many saw mills and related organizations which were based on the Thunder Bay River and did not have railroad service, especially before 1890. These facilities are not included in this list.