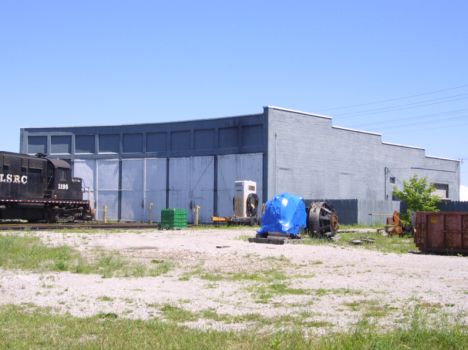 Alpena Junction is the location of the Lake State Railway's yard in Alpena, located about 1/2 mile north of the Thunder Bay River on the main line.  It is also the point where the branch to the cement plant leaves the main line in a northeast direction from the end of the yard.  The Lake State 5-bay roundhouse is also located within the wye at Alpena Junction. There was originally a turntable at this location, which was later replaced with switches for each door.  The Detroit & Mackinac's dispatching office was also located in an office off the roundhouse at Alpena Junction for many years.

Photo Info/Credits: A 2002 photo of the roundhouse. [Dale Berry]

Clearing for Roundhouse - 1900.  The D&M railroad s clearing ground for a new roundhouse at Alpena Junction in a novel manner. The stumps are thick on the spot, but instead of botherinh wih dynamit a chain is would round the stump to be remoed, the other end is attached to a locomotiv on the track near by, and in about 0 seconds after the engine starts up the stump, roots and all, is lying on the top of the ground ready to be carted away. [True Northerner-1900-0613]