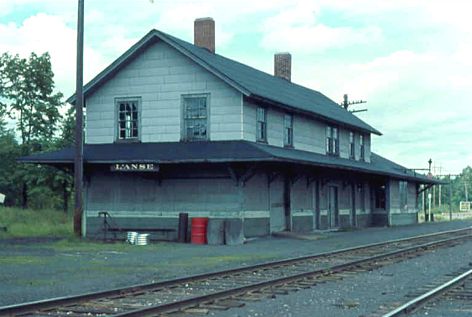 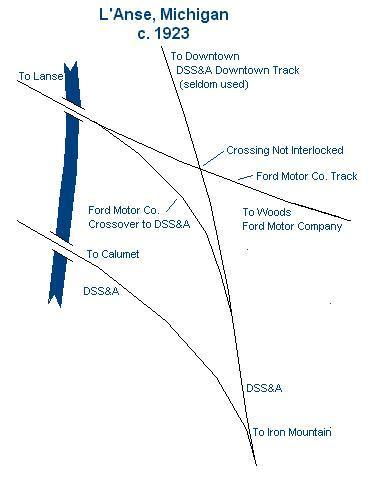 L'Anse was  settled in 1660. It was incorporated as a village in 1873. It was a station stop on the Duluth, South Shore & Altantic railroad on their line between Marquette and Houghton. The location was also an industrial center for shipping, logging and forest related products. The Ford Motor Company had lumber operations in the Village and adjacent areas in the early 1900's.

Photo info/credits: Top, the DSS&A depot at L'Anse in the early 1970's. [Charlie Whipp]. Below, a 1923 era map transposed from a 1923 blueprint on file at the State of Michigan Archives. [Dale Berry]. Bottom, a "birdfs eye" view of Lanse harbor showing the ore (right) and commercial/coal dock (left) in 1881.

The DSS&A L'Anse statopm was a rectangular wood-framed building which was built in 1890. It was 15' by 85' with a hipped room and wide overhanding eaves supported by wooden brackets. It includes a two-story segment 60' long and a single-story segment 25' long. [UPM]