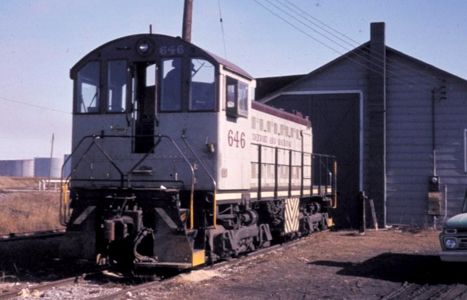 North Bay City was the major yard for the Detroit & Mackinac railway in Bay City.  Northbound freight trains originated here, while passenger trains originated in Bay City proper and passed through here on their way to Tawas City and Alpena. The yard is still used today by the Lake State Railway, however the former D&M main line is truncated north of the yard.  The Lake State uses the Central Michigan from this yard south and west to Bay City West Side and north through Wenona.

Photo info/credit:  Top, D&M's switcher, #646 pauses at the North Bay City yard office in 1969. [Charles Geletzke Jr.]. 2nd photo, a view of the D&M freight office at North Bay City, where the line crosses E. Wilder Road. The building is now used by the Straits Corporation wood treating operation south of the building.  2nd photo, the D&M's engine house in the yard.  This was formally a freight house which was retrofitted into an engine house, probably when the line was dieselized in the 1940's. Note the sand tower sticking up from behind the building, about mid-building. [Both, Charles Geletzke]. 4th photo, D&M #139 stops near the coal dock at North Bay City yard. [Charles Geletske Jr.] 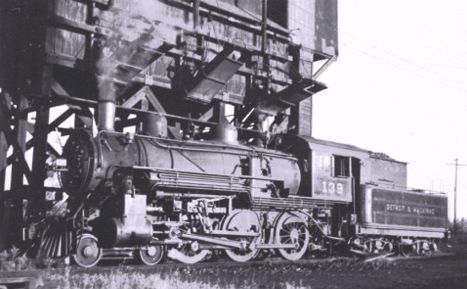 October 22, 1896. The deed from F. W. Wheeler & Co. to the Detroit & Mackinac Railway, conveying the Wheeler farm, so-called, was put on record yesterday. The deal was consummated last July when it was chronicled in The Free Press. Since that time the railway company has laid out 4,000 feet of switches, built a round house, turn table, water tank and train dispatcher's office on the property. DFP-1896-1022]

August 11, 1905. Seeing snakes was a reality in North Bay City Sunday. A large cage full of the reptiles was released by the wrecking of one of Sun Brothers Circus cars. The train jumped the track at a transfer switch, one car overturning. Most of the reptiles were recapture during the day. [Owosso Times-1905-0811]