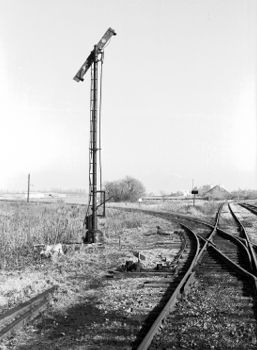 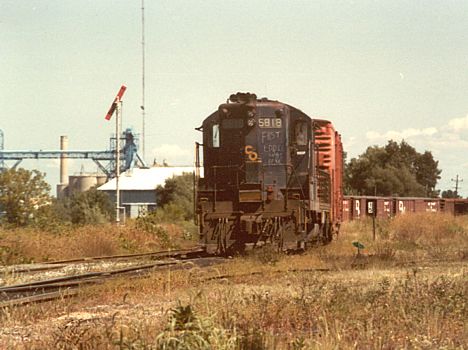 When the Detroit & Mackinac railroad built south into Bay City in the mid-1890's, they crossed the Saginaw River on their own swing bridge. Once on the south bank of the river, they crossed the Michigan Central's Water Street spur and the Pere Marquette Belt Line at a place later named Foss, or Foss Junction. The name was related to the Foss Lumber operations nearby. The crossing at Foss was controlled by a horizontal/vertical target signal, originally lighted. The target was normally left in position for the D&M to cross and was changed by trainmen from the other roads.

Photo info/credits: Top, looking east, the line going straight east to the left is the New York Central. Parallel to it is the Pere Marquette line to Essexville. The D&M used the PM line up to this point where it branched off to the north (left in the photo) crossing the NYC and then north over the Saginaw River swing bridge. The D&M crfossing at this time was a "slip switch" diamond, which was capable of connecting D&M trains with the NYC, or crossing the NYC for a connection to the Pere Marquette. [Robert W. Smith]. Bottom, C&O 5818 is the local Bay City switcher, near the Foss crossing, in the late 1970's. [Dale Berry]