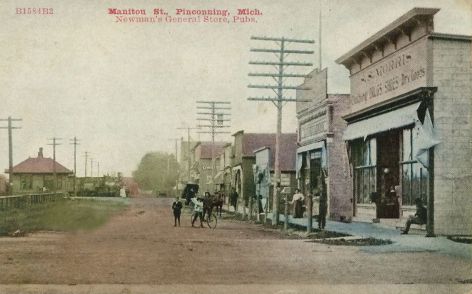 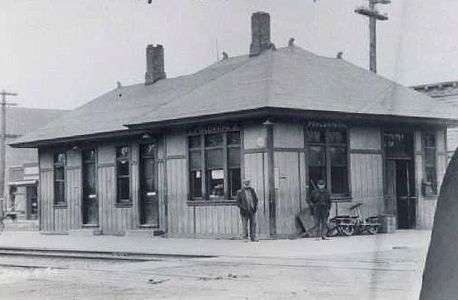 Pinconning is a city on the Michigan Central/NYC main line north of Bay City in Bay County. The city was settled in 1872 with a saw mill. It became a junction point for the MC's branch line to Gladwin and forest areas. It was also home to the Glencoe, Pinconning and Lake Shore railroad which started on Saginaw Bay and went west through this community to the forests to the west and southwest.

Photo info/credits: Top, the MC depot in an early postcard view. The train at the left is a southbound passenger train from Mackinaw City bound for Bay City. The train at the right is probably the Pinconning to Gladwin mixed local, which is making a connection for passengers.  2nd from top, Another view of the same scene, from a greater distance. This is Manitou Street looking south. It may have been taken the same day with the same trains as the top photo. [Both Alan Loftis Collection]. 3rd from top, an old photo of the MC Pinconning Depot. Bottom, a 2007 photo of the cement foundations for the MC's water tower at Pinconning. [Dale Berry]

1894. Roundhouse Burned - 1894. The Detroit Free Press reports that "incendiaries" set fire to the Michigan Central roundhouse at Pinconning. "It was entirely burned". [DFP-1894-0921]