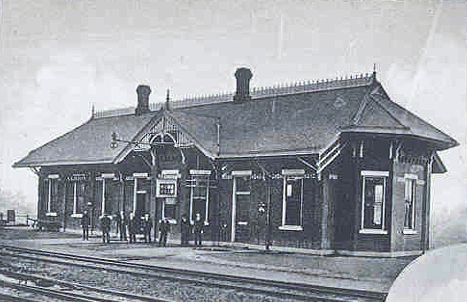 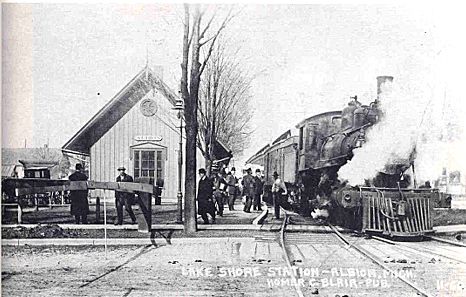 Albion was settled in 1833, named after a town in New York state. The early town, in eastern Calhoun County, had a grist mill along the river. Albion became a village in 1855 and a city in 1855.

The first railroad to arrive in Albion was the state owned "Central line" in 1844. It became the Michigan Central shortly thereafter when the state sold their interests to private parties. In 1844, the main line was extended to Marshall.

Albion's other railroad, originally called the Northern Michigan Railroad, became the Lake Shore & Michigan Southern's Lansing Division, from Jonesville to Lansing came through in January, 1872 and crossed the Michigan Central at grade (see Tower A). Albion was also a major location for interurban railroads.

Tower A was the name given to the Interlocking tower. Letters were often used to describe towers and stations as a time saving step when using the telegraph. It was easier to tap out "A" instead of the longer "Albion" or "Albion Tower". These approved letters were listed in the employee timetables, a practice which lasted into the 1960's even though telegraph had long been discontinued. The Michigan Central was an early adopter of manual block stations which allowed the spreading out of trains to avoid collisions. The MC was also an early adopter of automatic block signals to prevent collissions on the main line. The Lansing Division, on the other hand, almost never had signals except at interlocked crossings and as train order signals on stations which were used for train blocking as well.

Photo info/credit: Top, the Michigan Central Albion depot in 1894. The MC was still a single track main line at this time. [Frank Passic collection]. Bottom, the Lake Shore station on North Superior Street (north of the MC), date unknown, with a passenger train taking on passenters. 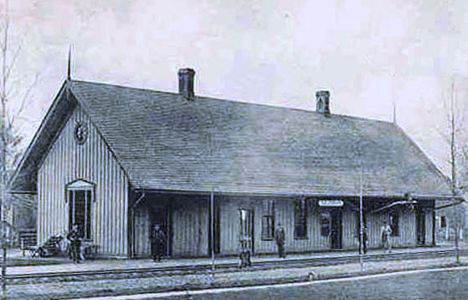 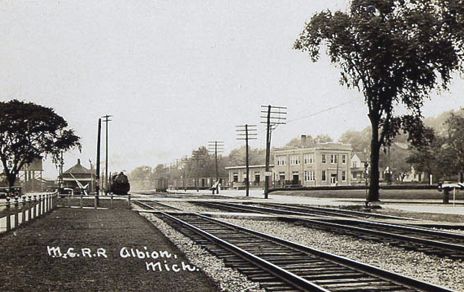 1917. The MC had a station agent here during the day shift. Nearby Albion Tower was staffed around the clock. Albion also had a dedicated freight agent. [TRT]

1920 - On the Michigan Central, this is a passenger and freight agency. Interline tickets are issued. J. C. Dunn is the agent.. [MCOAS]

1925 - the Lake Shore Lansing division is down to two passenger trains each way per day and perhaps a freight or two. The LSMS and MC were both under New York Central control and most traffic between Ohio/Indiana and Lansing began going other ways, making this route less important.

1945 - Historian Graydon Meints noted that by the end of World War II, most of Albion's heavy industries were located east and north of town on the NYC Lansing Branch. The only major industry on the old Michigan Central was Albion Malleable Iron. the switch entine, when there was one, would spend most of its shift on the NYC tracks. Most freight was set out westbound (from Jackson) and pick ups were eastbound (for Jackson). When Meints worked at Albion in the early 1960's, there was an agent and three clerks and the station was busy.

1950's - Lee Lovellette notes that he was told by an individual that a crew out of Hillsdale would taxi up to Albion and switch the Lansing Division branch line and then taxi home. This continued until operations were taken over by Conrail. This was likely due to union contracts and continued even though the line had been truncated.

The LS&MS Lansing branch had a water tower in Albion, noted on maps between 1900 and 1926. It was likely there early in the operation of this line.  The tower was located west of E. Monroe Street, south of Mulbury. The water was pumped from a well with a gas engine, located in an adjacent shed. [SAN]

Albion, May 17. - A double attempt was made here yesterday to wreck trains on the Michigan Central. The tracks were blocked on each side of the city and only the merest chance saved a fast train from being derailed. When the section hands went to work shortly before 6 o'clock they discovered that a T rail had been hammed in the point of a switch branching from the eastbound track. Almost at the same time the man at the interlocking tower found the switch of the westbound track just west of the station was hammered full of splicing blocks. Slow freight crossing each of the obstructions had pounded the irons down far enough to save the fast trains which passed shortly after from derailment. [Railroad] detectives were summoned from Chicago and Detroit. [LSJ-1913-0517]