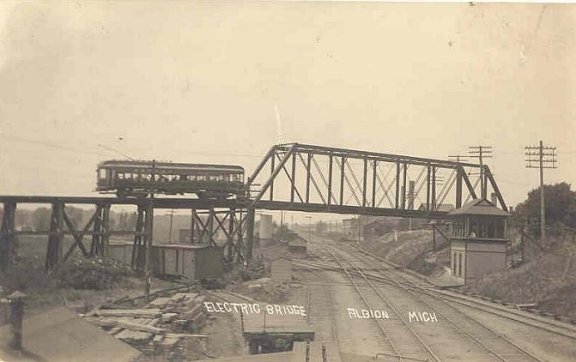 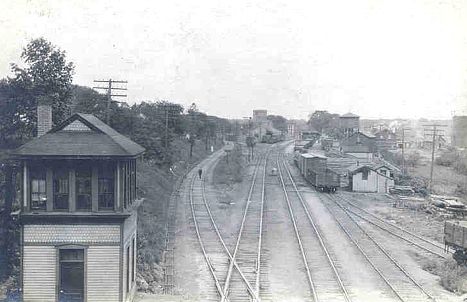 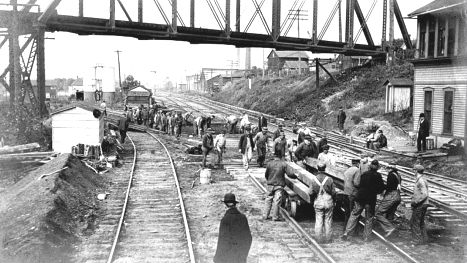 Tower A in Albion was an interlocking tower which controlled the grade level crossing of the Michigan Central's main line and the north-south Lansing Division of the Lake Shore & Michigan Southern. At the point of crossing, these lines were almost parallel. Heading north after the crossing, the Lake Shore went east up a grade into the downtown area and then northeast out of town.

Photo/map info/credit: Top, looking west, the electric interurban line crossed both steam railroads on a bridge overhead. Tower A is at the right of this bridge but the tower did not control the interurban track. 2nd photo, another photo of Tower A looking east towards downtown Albion. The line to the left is the Lake Shore line going towards Lansing. The MC water tower can be observed on the right near the depot. [Frank Passic Collection]. 3rd photo, section crews from the New York Central and the Michigan Central dismantle the grade crossing at Tower A. With the consolidation of the Lake Shore into the NYC in 1916, combined with reduced traffic on the Lansing Division, this allowed the NYC/MC to reduce costs by eliminating the need for Tower A. The angle of the crossing was also very slight, making the potential for derailments high. Following removal of the diamonds, through trains on the Lansing Division entered the MC mainline, and "switched back" to the other side of the branch. The NYC also used the MC passenger station east of the crossing via a sidetrack which was maintained for this purpose. [Doug Leffler Collection]

Map Info/Credits: Four views of the track diagram at Tower A, drawn from the interlocker file drawings at the State of Michigan Archives. These are from 1898, 1915, 1926 and 1936 respectively. [Dale Berry]

1917, The MC had an towerman-operator here around-the-clock. [TRT]