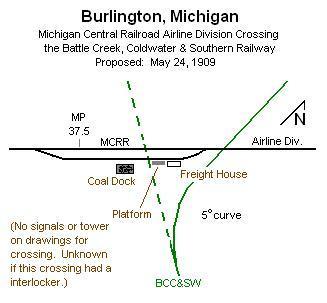 Burlington was settled in 1833 in south central Calhoun County about five miles west of Tekonsha. It became a village in 1869. [MPN] The Air Line branch of the Michigan Central came through the area in the 1870's and they established a station known as "Burlington Station" about one mile south of town. A new railroad, the Battle Creek, Coldwater and Southern railway was proposed to run from Coldwater north through this area to Marshall. It was plotted and graded but it is not known whether track was laid. A map of the route is provided, drawn from records in the State of Michigan Archives.

Map info/credit: From drawings in the State of Michigan Archives. [Dale Berry]

1920 - On the Michigan Central Air Line, this is a passenger, freight and express agency joint with the American Railway Express Company. Interline tickets are issued. J. C. Dunn is the agent. [MCOAS]