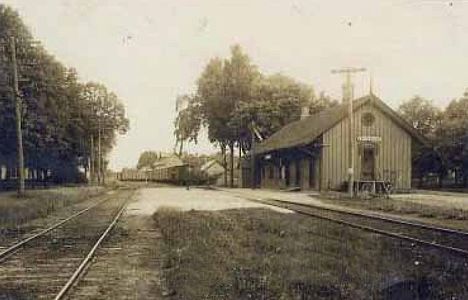 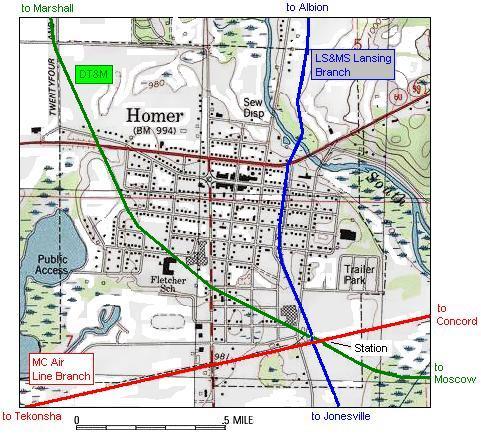 Homer is a village in southeast Calhoun County which was settled in 1832. It became a village in 1871. [MPN] Homer was home to three railroads, which crossed at Homer Interlocking tower on the southeast edge of town. The busiest of these railroads was the Air Line division of the MC which from time to time was a major freight line between both Niles and Elkhart, and Jackson. Also heading through town was the Lansing division of the Lake Shore, and the main line of the DT&M.  All three railroads likely had passenger and freight agencies in town, but may have been consolidated near Homer Tower in later years.

Photo/map info/credit: Top, the Lake Shore depot at Homer. [Alan Loftis]. Below, a USGS map of Homer with the three rail lines enhanced. Where the Lake Short crosses the river, the pilings for the trestle are still visible in 2003. The MC's Air Line right of way is still easily visible but the DT&M line is very difficult to follow. [Dale Berry]

1920, On the Michigan Central Air Line, this is a passenger and freight agency. Interline tickets are issued. O. W. McDoll is the agent. The telegraph call sign is "HM". [MCOAS]

Novewmber 11, 1966. Gas Threat in Train Wreck Creates National Interest. Residents of Homer were just rising at 7 a.m. November 11 when an explosion rocked their homes and hurtled the community of 1,500 across the front pages of the nation. The explosion was caused when 25 cars of a 118-car Detroit-bound freight train derailed and slammed into a builk oil storage area on the southeast side of Homer.

Railroad officials at the scene blamed the derailment on a hot box. Intensifying the concern by law enforcement officials who rushed to the scene was the fact that two of the derailed cars contained vilnyl-acetate and another, vinyl-chloride, chemicals which under certain heat conditions can unite to form a deadly gas called phosgene. The car had been used in World War 1. State police and sheriffs deputies evacuated the town and two schools as firemen from eight surrounding communities stood by to combat the fire, which burned for more than 10 hours. Mixed with the smell of chemicals was the stench of burning fruits, turkeyis and vegetables, contained in refrigerated cars piled one atop the other in a mass of twisted steel and wood.

At 5 p.m. a chemical expert from the railroad declared the danger of poisonous gas over and weary Homerr residens who had spent the day with relatives began returning home. No one was hur. Twisted box cars laying at the side of the rails and the blackened shells of oil tanks remained as the only reminder of the near tragedy. [Hillsdale Daily News]

Septembee 29, 1870 - The Air Line Railroad. From the Jackson Citizen. Yesterday ten car loads of iron arrived for the Michigan Air Line Railroad, and track laying between Union City and Homer will be resumed immediately. One half of the track between Concord and Jackson has been "balasgted," and is quite smooth. The company expects to earn the reputatio of having one of the smoothest roads in Michigan, as well as one of the most direct routes through the State. The village of Concord, in this county, is quite livelynow with railroad men. Everybody has boarders.

For a new road, mostly unballasted, it is very smooth near Homer. The fencing is in a fair state of progress, and telegraph poles are already being put up along the line. The passenger house at Homer is being pushed rapidly forward. The bridging and grading in Clarendon are now completed, and the iron from Homer to Tekonsha, to which place it is laid from th west, will be soon united. [DFP-1870-0929]