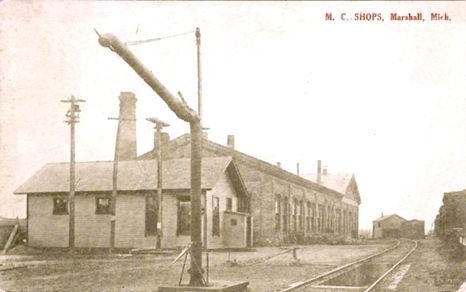 The Michigan Central railroad shops were located at Marshall but were moved to Jackson around 1871. The move was likely made for a number of reasons. By this time, Jackson was interchanging more freight and passenger traffic with connecting roads. Also, the Air Line (between Jackson and Niles) was nearing completion and had been purchased by the Michigan Central, giving them a second and possibly faster route for freight traffic to Niles. At this time, the MC main line was still single track and the capacity of the Air Line added to this.

The MC had a water tower and standpipe at Marshall (see photo).