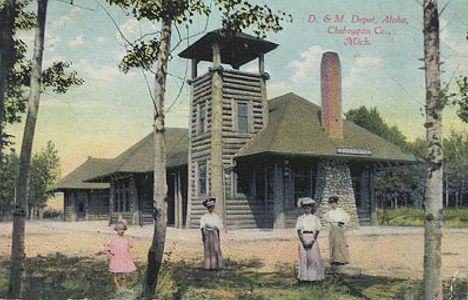 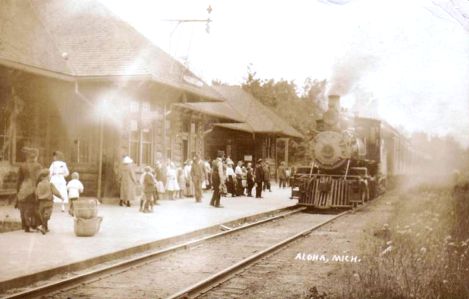 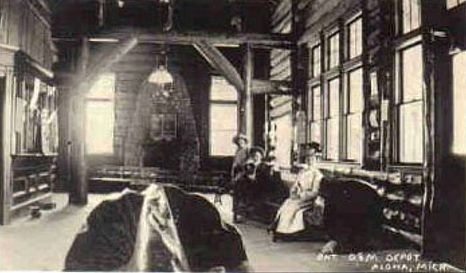 Aloha, in Cheboygan County, was formed as a sawmill settlement about 1903. [MPN] The Detroit & Mackinac railway came through here and established a station stop. The town, on the east side of Mullett Lake, quickly became a tourist spot, and the D&M established a beautiful but rustic depot here.

Photo info/credits: Top, the D&M depot at Aloha. [Alan Loftis Collection] 2nd photo, a color postcard of the depot in the early 1900's. The depot had a look-out tower which gave views of lake sunsets and of oncoming trains. [T. J. Gaffney Collection] 3rd photo, the highway entrance to Aloha with the D&M crossing in the distance at the entrance to town. 4th photo, a southbound D&M passenger train arrives at Aloha to pick up passengers. Bottom, an old photograph of the inside of the rustic depot at Aloha. Note the stone fireplace and log construction. [Alan Loftis Collection]

1924. In the Matter of the Application of the Detroit & Mackinac Railway Com pany for Authority to Make Its Stations Aloha, Tower, Saganing, Long Lake and Lupton Non-Agency Stations. D-1955. September 15, 1924.