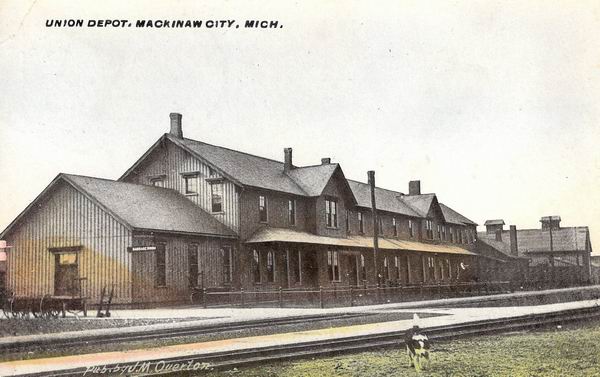 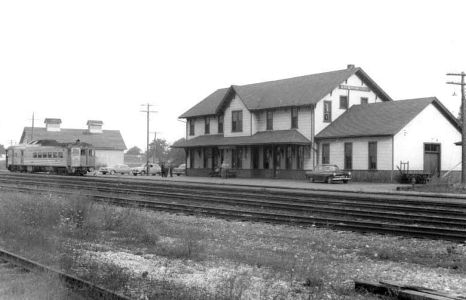 Mackinaw City, at the northern tip of Michigan's lower peninsula, was settled in 1684. Two railroads came to Mackinaw City in 1881 ( Michigan Central) and 1882 (Grand Rapids & Indiana). A line from St. Ignace to Marquette in the upper peninsula was also built in 1882 and a straits break bulk system was established and upgraded to a car ferry operation. Mackinaw City was also a passenger station for commercial passenger ferries to Mackinaw Island.

Originally both the Grayling and Mackinaw City depots used their second story as a hotel for the general public. Judge Robert Borsos, who wrote an article for Trains, tells about working as a telegrapher at Mackinaw City, collecting room rent and showing guests to their room upstairs. One responsibility he had was to point out the fire escape device - a long rope attached to the leg of the bed that was to be thrown out the window. [GM]

The Michigan Central/ NYC railroad yard curved along the outside of the eastern side of the wye. The southern-most end of the MC/ NYC yard was east of Nocolet Street and just south of the I-75 exit 338 to Nocolet Street. [MIRX8]

The western end of the curved GR&I yard was west of I-75 and south of the Marest-Pond Street intersection. The eastern end was at South Huron Street just east of the railroad car ferry dock. [MIRX8]

The MC and PRR shared a "union" passenger station here, which continues to exist as a restaurant. They also shared a "wye" for turning locomotives and equipment, and a roundhouse for locomotives.

The Michigan Central yard in Mackinaw City had a 170 car capacity.

Photo info/credit: Top, a postcard view of the Mackinaw City union depot. 2nd photo, a 1961 photo of the depot with a "beeliner" passenger train nearby. [Alan Loftis Collection]. 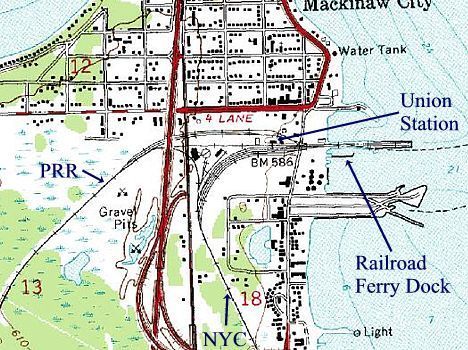 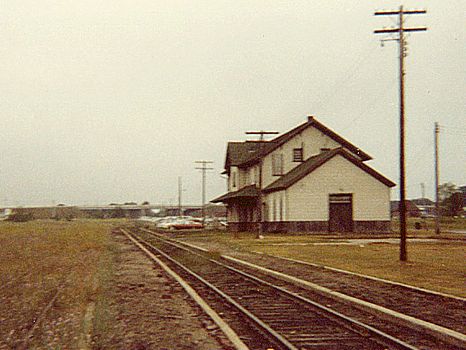 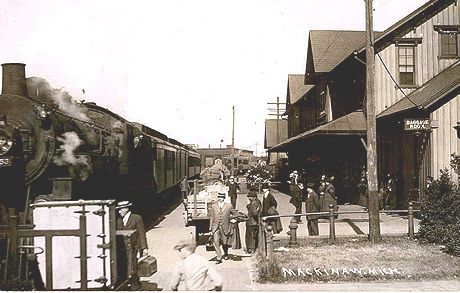 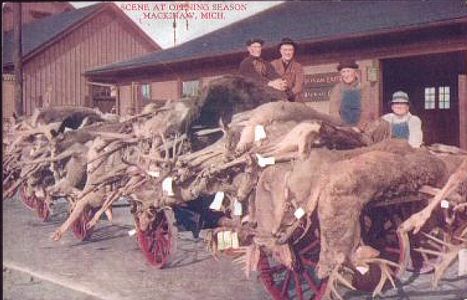 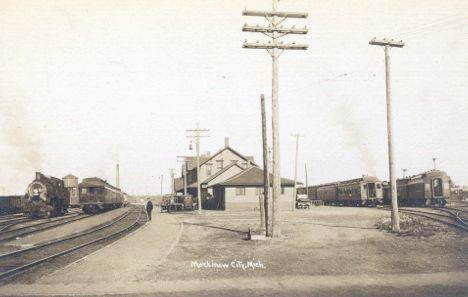 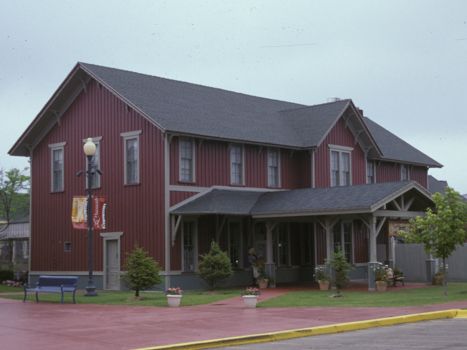 Photo info/credits below: Map, a 1976 USGS map showing the two railroads and railroad ferry dock. [USGS, Dale Berry]Below, the depot in its final years under railroad ownership in September, 1980 [Timothy Tryon]. Next, a northbound train is unloading passengers and freight at the Union Depot. This would be either a Michigan Central or GR&I train. Probably around 1920.  Next, deer are piled up on freight carts awaiting loading into baggage cars on soiuthbound passenger trains, in the 1930's. Next, A 1940's view of the union station with a MC locomotive in the foreground. The straits dock is at the photographer's back. Note the NYC water tower and roundhouse, behind the locomotive at the left. [Cecil Hommerding photo, Doug Leffler Collection].  Next, another similar photo, from around 1918. This one showing both MC and GR&I passenger trains. The GR&I used the north side of the depot, and the MC/ NYC used the south side. [Charlie Whipp Collection],  Last, the depot, now used as a seasonal restaurant in a shopping mall - still in its original location. [Mark Dobronski]