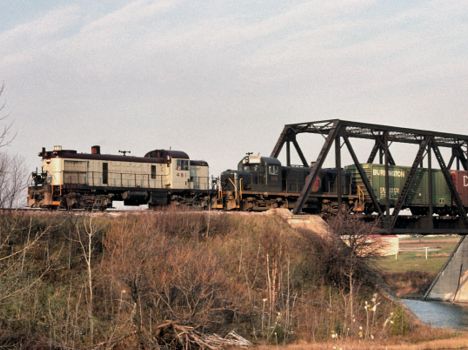 This is a high, fixed span bridge originally used by the D&M to reach Cheboygan.  The span, across the Cheboygan River, survives as a foot/snowmobile bridge.  The bridge was constructed just before the D&M reached its north terminus in 1905.  The railroad stopped using the bridge around 1981 and the rails were removed about 10 years later.  The bridge now serves pedestrian and snowmobile trail.

1903. The Cheboygan extension of the D&M is making rapid progress. Track is now laid to within six miles of Cheboygan and will be up to the Cheboygan river in a few days. This is three miles from the city. The bridge has been promised by the Detroit Iron & Bridge works by the middle of November, and if this promise is kept the line will be in Cheboygan in the first part of December. [DFP-1903-1030]