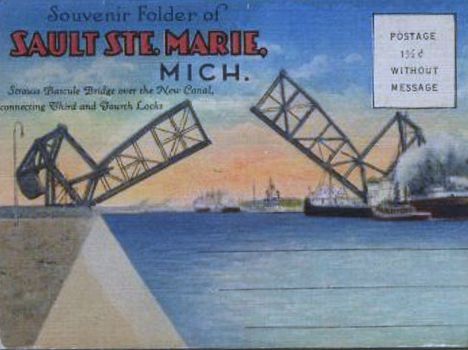 Bascule Bridge Over Soo Locks Postcard - over locks #1 and #2

This is a series of bridges over the St. Marys River and rapids between Sault Ste. Marie, Michigan and Sault Ste. Marie, Ontario.  From south to north, the first set of bridges over locks 1 and 2 is a lift bridge.  The next bridge over locks 3 and 4 is a double bascule bridge (only one of its type in Michigan).  Next, there are a number of fixed spans on the line, with the last movable bridge being a swing bridge near the Canadian lock. The bridges were completed in January, 1888.

International railroad bridge. This bridge across the St. Mary's River was a cooperative venture involving four railroad: the Duluth South Shore and Atlantic; the Minneapolis, St. Paul and Sault Ste. Marie; the Grand Trunk Railway of Canada, and the Canadian Pacific. The substructure was built by a well-known bridge contractor, J. Reid, while the contract for the superstructure went to the Dominion Bridge Company of Lachine, Quebec. The company was able to underbid all of the American companies because it was able to import cheap duty-free Scottish steel and then fabricate the structural members in Canada. The rest of the bridge crossing the American Navigation Canal was built by the Detroit Bridge and Iron Works. This section consisted of ten steel camelback through trusses, each 239' long, resting on finished ashlar piers, with each pier anchored in the bedrock of the river bottom. One of these trusses was removed in 1913 to enable construction of a new moveable bridge over the American locks, but nine of the original spans remain. [UPM]

October 10, 1944. The twin-bascule bridge at Sault Ste. Marie was damaged when the span collapsed into the water under the weight of a freight train. The south span was damaged and a locomotive fell into the water. [PHTH]