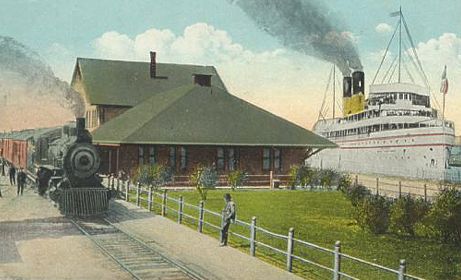 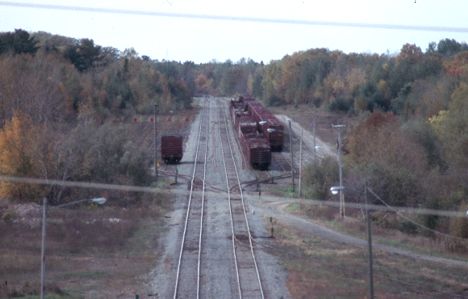 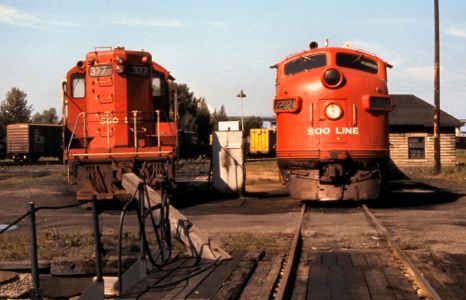 Sault Ste. Marie was settled by Europeans in 1641 at the St. Mary River rapids in what would later be Chippewa County. It was incorporated as the Village of St. Mary in 1849 but annulled in 1851. It was reincorporated in 1879 and as a city in 1881. [MPN]

The town was home to two railroads. The Duluth, South Shore & Atlantic reached here in 1887 via their Soo Branch from Soo Junction near Newberry. The Soo Line railroad arrived in town the following year in 1888. Both railroads shared a yard west of downtown, and also shared a union depot downtown through their ownership of the sault Ste. Marie Union Depot Company. The depot was reached by a short spur from the main line near the bridge and locks. The two railroads also owned the International Bridge to Sault Ste. Marie, Ontario, through a joint corporation.

Both railroads used a 227' long bridge (No. 2) over the Soo Power Canal. The bridge was built on stone piers. [CB/MIHX8]

The Sault Ste. Marie Belt Line Railroad ran east along the south side of the power canal and then swung north on the west side of Pickett Street into the Union Carbide Company chemical works on the north side of Portage Avenue and just south of the power plant.

Photo info/credits: Top, the Union Depot in a postcard view. Note the closeness of the depot and the Soo locks. 2nd photo, the yard at Sault Ste. Marie in the 1990's, taken from the highway bridge. This yard was shared by the Soo Line and DSS&A. It is now a CN facility. [Shaun O'Day] Below, two Soo Line first generation locomotives sit at the turntable at the roundhouse in the yard. July, 1975 [Rob Kitchen]

1887 - The DSS&A arrives via their Soo branch from near Newberry.

1887 - The Grand Rapids Daily Eagle reported on October 10th that the first regular passenger train on the "Soo" branch of the DSS&A left the Soo at 6 o'clock this morning. Five trains will run daily, making western and eastern connections. The newspaper also said that "The Soo is 'now out of the woods'". [MIHX8]

Roundhouse. The DSS&A roundhouse here was built in 1887 when the line was completed. The roundhouse originally contained 45 bays and extended a full 180 degrees. Overtime, the stalls were reduced to five. They were 80' deep. The inside circumference was 75' and the outside 240'. It was a wood-framed building with a roof pitched slightly to the rear. One wall - originally an interior fire wall - is of brick construction. The turntable was 6' long and rests in a concrete-lined pit 5' deep. It bore the nameplate which rad, "Philadelphia Turntable Company, No. 33" and was probably installed about 1920. [UPM]

Union Station. The Sault Ste. Marie Union Station was built in 1890 at 566 W. Portage Avenue. The DSS&A and Soo Line used this depot. It is a rectangular building constructed of finished, coursed cut red sandstone. The center section was two stories high with a gabled roof and measuring 50' by 50' while there are two single-story wings with hipped roofs, each 40' wide by 66' long. [UPM]

Railroad Bridge Over Power Canal. In 1900,this bridge was built when the Michigan Lake Superior Power Company constructed its massive power canal through Sault Ste. Marie. It is a four-span steel girder bridge, 15' wide and 225' long, resting on piers and abutments constructed of brick with stone facings. It was built by the Lassac Branch of the American Bridge Company of Chicago. [UPM] It continues to exist in 2016.