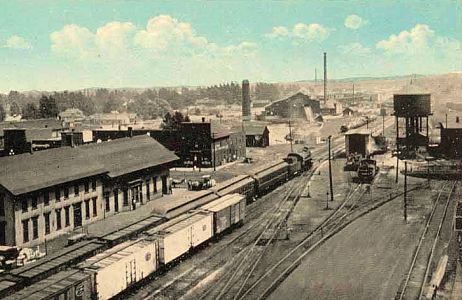 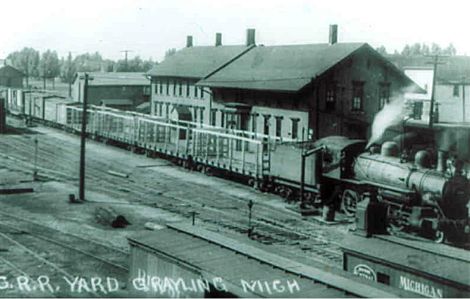 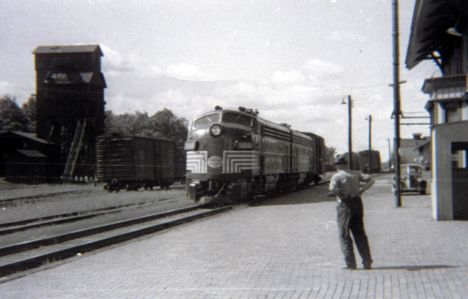 The town was the main division point on the Michigan Central Railroad between Bay City and Mackinaw City. Train crews changed here and the town had locomotive facilities and a yard here. Just north of town, a branch line left the line heading northeast to Lewiston in Montmorency County which had numerous forest branches. A Manistee & Northeastern branch line from Messick via Kalkaska entered town just north of the depot in 1910 and a short connection was built from this branch south to Camp Grayling in 1914. In 1925 the branch was abandoned leaving a short MC Rasmus Branch from town to the Camp. [MRL]

Photo info/credit: Top, a color retouched postcard view of the yard and industries at Grayling. A southbound mixed passenger-freight train is at the station and at lease one other locomotive is waiting on the ready track near the water tower. The roundhouse and turntable are on the right, almost out of view. [Alan Loftis Collection] 2nd photo, A postcard view of the Michigan Central depot at Grayling with a southbound freight train awaiting orders. The depot was built in 1882. Photo taken around 1915. [Charlie Whipp Collection]. 3rd photo, New York Central diesel 1686 switches in front of the Grayling Depit in August, 1954. [Neil Plagens]

1873 - The Jackson, Lansing and Saginaw railroad came through this area as they built north to the Straits of Mackinaw.

1882 - The current Michigan Central depot at Grayling is built.

1892 - A branch line is built northeast to Lewiston, with numerous forest branches. [MRL]

1910 - The Manistee & Northeastern builds a branch line from Messick via Kalkaska to Grayling. [MRL]

1925 - The M&NE branch line from Messick is abandoned. The spur to Camp Grayling remains, used by the MC.

1933 - The branch northeast to Lewiston is abandoned. [MRL]

1939 - The roundhouse burns to the ground, with two locomotives inside. It is not rebuilt.

The following information comes from the Crawford County Historical Society.

From Priscilla Geyer, Curator of the museum: I did some research and I spoke at length with a man who is in his eighties named Irv Mosaac. He was a brakeman for the MC and slept upstairs in the depot between 1950 and 1952. He not only told me how the depot was run in his day but also how it was run in 1900 and earlier. He came to the depot (he lives in Grayling) and showed me exactly what each part of the depot was used for and where everyone sat. Irv's father was a trainmaster at the Grayling Depot between 1928 and 1930.

In 1872, the Jackson, Lansing & Saginaw railroad made a grade and laid track in Grayling. The company also built a freight house. At that time, the railroad companies named the areas and they names this area Crawford Station. However in 1874, Rube Babbitt Sr. had the grayling fish identified as such and the townspeople changed the name to Grayling.

In 1882, the JL&S leased their track and property to the Michigan Central Railroad. That same year, the MC built the depot that now stands and they also built a new freight house. A roundhouse was also built. There were 8 tracks between the depot and the roundhouse. In its heyday, the depot was truly a terminal. There were 7 northbound passenger trains and 5 southbound trains, as well as freight trains, all of which went through Grayling daily.

There never was a dispatcher in the Grayling depot. Irv explained that the dispatcher was always in Bay City. The telegrapher/operator sat at the desk by the large bay window on the track side of the depot. He received different train orders from the dispatcher in Bay City who controlled the main track. He then typed the order and gave it to the engineer and conductor. The telegrapher/operator also gave the crewmen their orders, letting them know which train they were to ride. In addition, her operated the train order lever/signal, allowing only those trains to pass which had their orders.

The upstairs of the depot consisted of 2 kitchens, a bathroom and sleeping quarters. The crewmen slept in the rooms on the left side of the long hallway and the engineers and firemen slept in rooms on the right side. The agent had his desk in the large area which is to the right of the telegrapher's area on the main floor. The agent was the one who assigned the crewmen their room and bed number upstairs; he wrote their names on the boards that were upstairs so that he could easily find them to get them on the train the next morning. The agent also sold tickets at the ticket window to passengers. His main function was to prepare the billing for the train cars and freight. Irv explained to me that the billing had nothing to do with money but, just as a order, was prepared for the whole train to know where the training was going, a billing was prepared for each car. There has been some confusion between the agent and the dispatcher. The dispatcher has been credited with assigning the room and bed numbers for the crew and also with sitting at the telegrapher's desk. However, Irv made it clear that there was never a dispatcher at the Depot and was very firm that the man who performed the above mentioned duties was called an agent. [Ed. Note: Individuals who assigned crew members to trains were often called Crew Dispatchers, which is different than the train dispatcher who controlled train movements. Hence the possible confusion.]

The roundhouse burned to the ground in July, 1939 at a loss of $150,000. It was never rebuilt. The cause of the fire was not clear. The roundhouse was made of pine and the fire started in the south end which had not been used for several years. There were two engines in the roundhouse at the time of the fire. 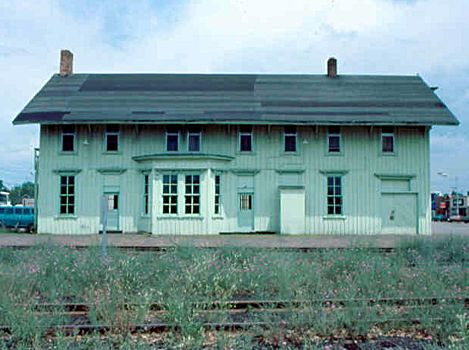 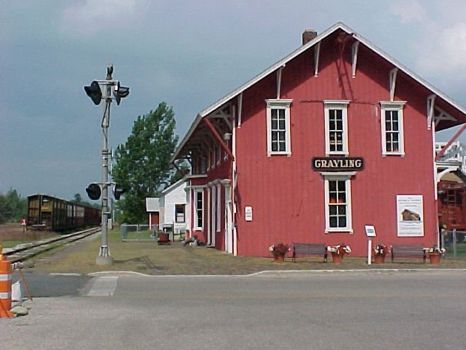 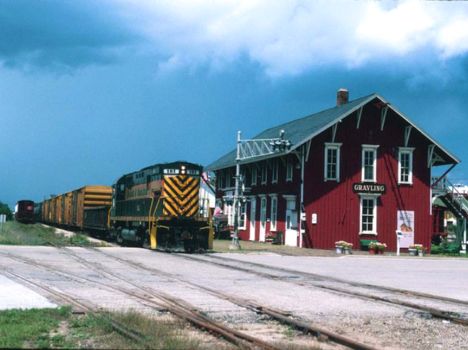 Roundhouse Moved - 1899 - The Michigan Central railroad is tearing down its roundhouse at Alger and will move it to Grayling. [Ironwood Times-1899=0513] 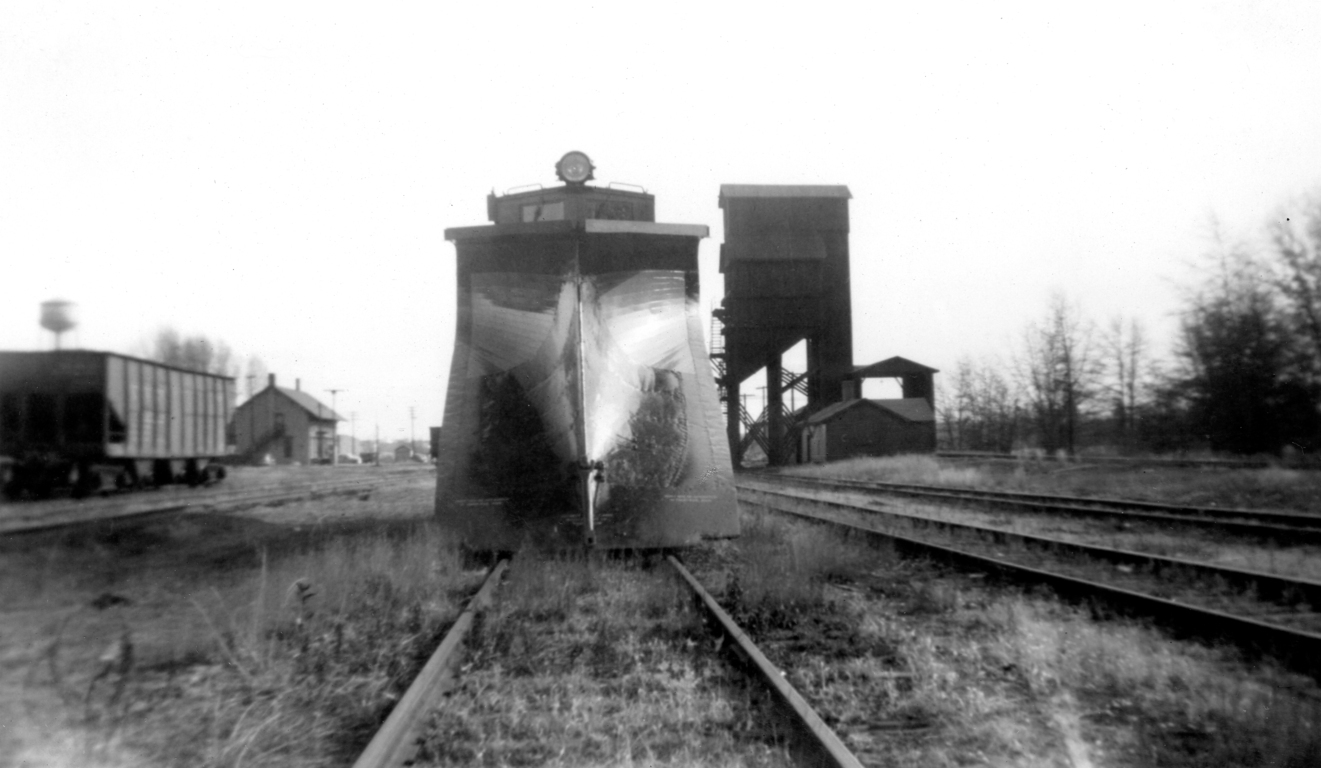