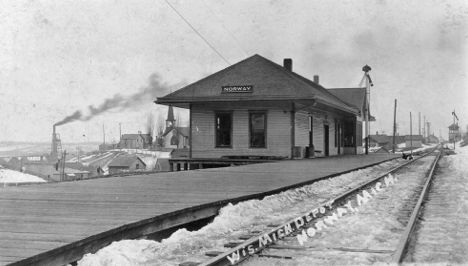 Norway was settled in 1877 after the sinking of a test pit for the Norway Mine.

Photo info/credits: Top, the Wisconsin & Michigan depot at Norway around 1909. This is a typical W&M depot according to historian Mark Worrall. This W&M depot in Iron Mountain is of the same design and still standing as of 2005. Note the Norway interlocking tower in the distance at the right, which is the crossing of the C&NW branch which ran up to the Norway and Cyclops mines. Both mines were closed at the time of this photograph. Aragon Mine Shaft #5 is at the rear of the photo on the left. As of 2005, there is still a pump in the mine shaft and it regulates the level of nearby Strawberry Lake. (The other Aragon mines are at the bottom of the lake). [Mark Worrall Collection, information from Greg Bunce]