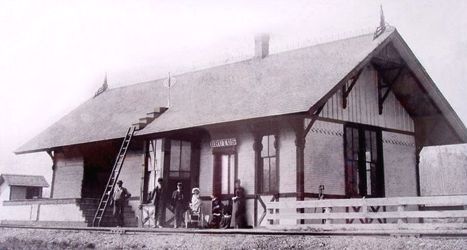 Brutus was originally settled as a stage coach stop in 1874. In 1882, the town was moved two miles east to a station location on the new Grand Rapids & Indiana railroad. [MPN]

Photo info/credit: The GRF&I depot at Brutus. Note the ladder and steps to turn the train order/block signal which was mounted on the roof. Displaying a stop indication for trains on a cold, icy winter night must have een the station agent's biggest challenge. [Alan Loftis collection]