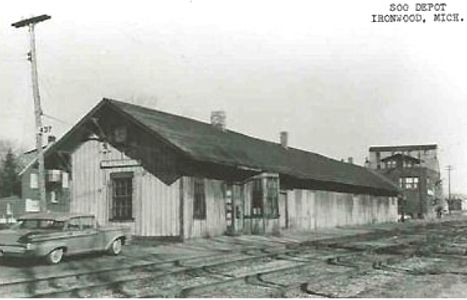 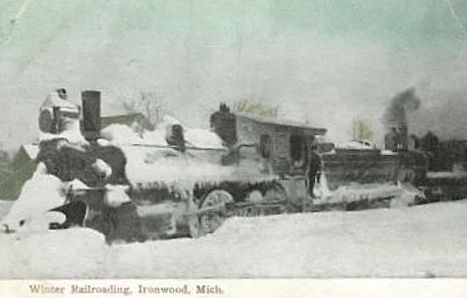 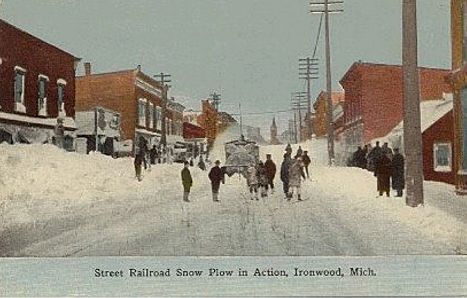 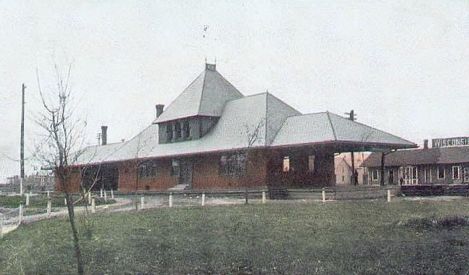 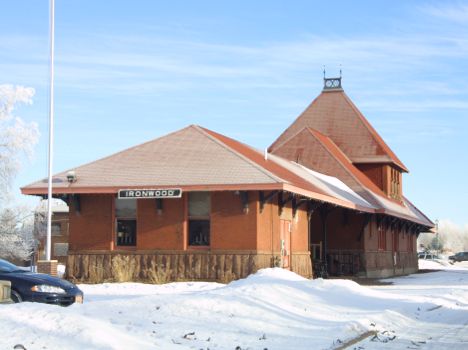 The Chicago & North Western railroad (formally the Milwaukee, Lake Shore & Western) built their depot here in 1892. The city had a street car line which ended at Giles, Wisconsin on the west and Bessemer on the east, including the neighboring cities of Hurley and Ironwood along the Montreal River.

Soo Line (WC) facilities included a register station and scales at this location. They had a yard, and a day/night operator in the depot in 1961. The depot was at MP 437.2.

The Soo Line railroad had a water tower in Ironwood. [SOO-W/1996]

The C&NW roundhouse in Ironwood was on Curry Street and was built about 1900. [UPM]

Ironwood Timeline (including Bessemer and Wakefield):

1880 - Bessemer is settled after ore is discovered at the nearby Colby mine.

1884 - Wakefield is settled on the south side of Sunday Lake. Ramsey, southeast of Bessemer is also settled with a saw mill located there. The town was originally called Ironville. The Sunday Lake mine is established and ships for 77 years, closing in 1961.

1885 - Ironwood is settled around several nearby mines. The Norrie and East Norrie Mines begin operations with production until 1935.

1885 - The MLS&W installs a 8 mile long branch from Wakefield north to Connorsville, mostly for logging purposes. They also build off this branch to the Sunday Lake Mine, and in 1890 to the Castile and Meteor mines. The line is cut back to Castile Mine in 1929 and abandoned/removed between Sunday Lake mine to Wakefield in 1959.

1885 - A 1.6 mile spur is built by the MLS&W from the main line to the Norrie Mine. This line also reaches the East Norrie Mine. They also build off this branch to the Pabst Mine, including the Aurora, and Vaughn mines.

1886 - The MLS&W builds a spur off the New Davis Mine spur to the Puritan Mine. They also build a mine off this spur to the Newport Mine.

1887 - The Gogebic & Montreal River railroad (C&MR) builds into Gogebic County on their line from Mellen, Wisconsin through to Keweenaw Mine in Bessemer (via Ironwood). It becomes the Wisconsin Central (WC - original) in 1888, and in 1909 becomes the Minneapolis, St. Paul & Sault Ste. Marie railroad, informally called the Soo Line (SOO).

1887 - The WC builds a 2.6 mile loop line from their main line (near the WI state line) towards the Norrie Mine, which has a number of mine spurs, including the Ashland Mine. The Ashland Mine was opened in 1901 and operated until 1926. The mine and town site was the second largest mine on the Gogebic range in 1902.

1893 - The nationwide Panic of 1893 reduces iron ore sales and production for several years.

1895 - The C&NW builds a short spur to the Mikado Mine, using a switchback to climb the hilly area. This branch is removed in 1919.

1900 - The Meteor mine begins operation near Wakefield and produces until 1904.

1903 - The C&NW builds a spur from the Davis Mine spur to the Royal mine and the Geneva Mine.

1906 - The Castile Mine near Wakefield opens and ships ore until its closing in 1923.

1909 - The Wisconsin Central becomes the MStP&SSM, or Soo Line.

1911 - The C&NW builds a spur to the Asteroid Mine, from their main line. They remove the 1.6 mile spur to the Norrie Mine.

1916 - The C&NW installs a short branch line to the Plymouth Mine in Wakefield.

1918 - The C&NW adds a Belt Line from nearly Hurley WI east across the state line to a junction with the Soo Line. (removed in 1957). They also build the Anvil Mine spur from their main line to the Anvil Mine in 1918.

1945 - About half of the Connorsville branch is removed, with the remainder removed in 1974.

1952 - The Wakefield mine spur and connections are removed, as well as the Plymouth mine spur.

1959 - The remainder of the Sunday Lake spur from Wakefield to the mine is removed. The New Davis mine spur is removed one year later.

1965 - The Peterson Mine spur is removed, as well as the Puritan Mine and the Royal/Geneva mine spur.

1981 - The C&NW removes it remaining railroad lines from the Ironwood area. 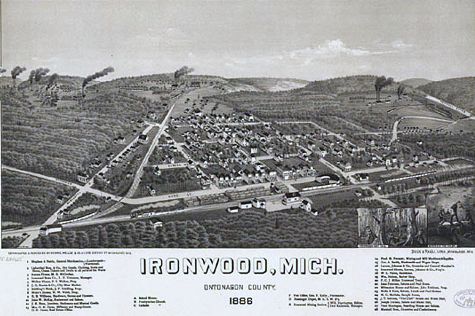