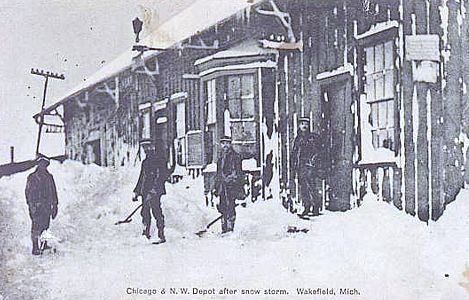 Photo info/credit: The C&NW depot at Wakefield, digging out from a snowstorm. [Alan Loftis collection]

Fire. Wakefield's greatest and most destructive fire occurred Christmas Eve, 1887. Mike O'Brien, manager of the theater had a pet monkey. This monkey upset a kerosene lamp in one of the rooms of the theater building and before many minutes were gone, the flames had licked well into the tinder-like material of all the buildings on Front street. Eighteen buildings were raised, including several on the west side of Sunday Lake street and the east side of Ascherman street. The Perry house on the northwest corner of Front and Ascherman streets was saved by the application of wet blankets. Snowballs were effective in checking the blaze on Sunday Lake street.

News of the fire was telephoned to Bessemer, but Bessemer's fire fighting equipment could not get through the snow covered forest trail and had to turn back. The damage was estimated at $80,000; only $9,000 insurance was in force to apply to the loss. No one was injured. Some, in fact, benefited; especially some of the miners who helped themselves to whatever articles they wanted which had escaped the flames. [IDG-1932-0714]