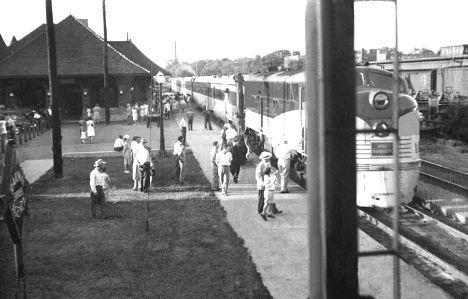 From 1847 to the start of the Civil War, elected officials and constituents came to Lansing by horseback, carriage or on the stage. Even though railroads had been in existence since the late 1830's, no rail line reached Lansing until the early 1860's. Then they came all at once from seven directions over a period of 16 years.

Railroads entered Lansing first in 1861 when the Amboy, Lansing & Traverse Bay railroad arrived from Owosso via Bath. (This line, now removed, was later the former Michigan Central Saginaw Branch. For five years, Detroiters wishing to visit the capital by rail booked passage on the Detroit & Milwaukee (later GTW) line from Detroit's Brush Street station and switched onto the Amboy line at Owosso.

In 1866, a second railroad reached Lansing from the south when the Jackson, Lansing & Saginaw built north into town from Jackson. This would become the other "leg" of the Michigan Central Saginaw Branch. This line gave good access from the southern two tiers of counties where most of Michigan's population lived at the time. Other roads arrived over the next 11 years from all directions. The Detroit, Howell & Lansing railroad built directly from Detroit in 1871 making this the fastest connection for visitors from Michigan's largest city. The last line to arrive was the through connection of the Grand Trunk Western from Flint and Port Huron. Ironically, this is the busiest of all rail lines remaining in Lansing today. [MRRC/MRL]

Photo info/credit: A Pere Marquette streamliner passenger train stops at the Lansing Union Station, which was located north of Michigan Avenue on the Michigan Central Saginaw Branch. The PM used this line from MA Tower to North Lansing as well as the station. Even though this was a "union" station, the GTW and Lake Shore had their own stations in Lansing. 1946 photo. [H. E. Smith, an operator at MA Tower, Al Smith collection]